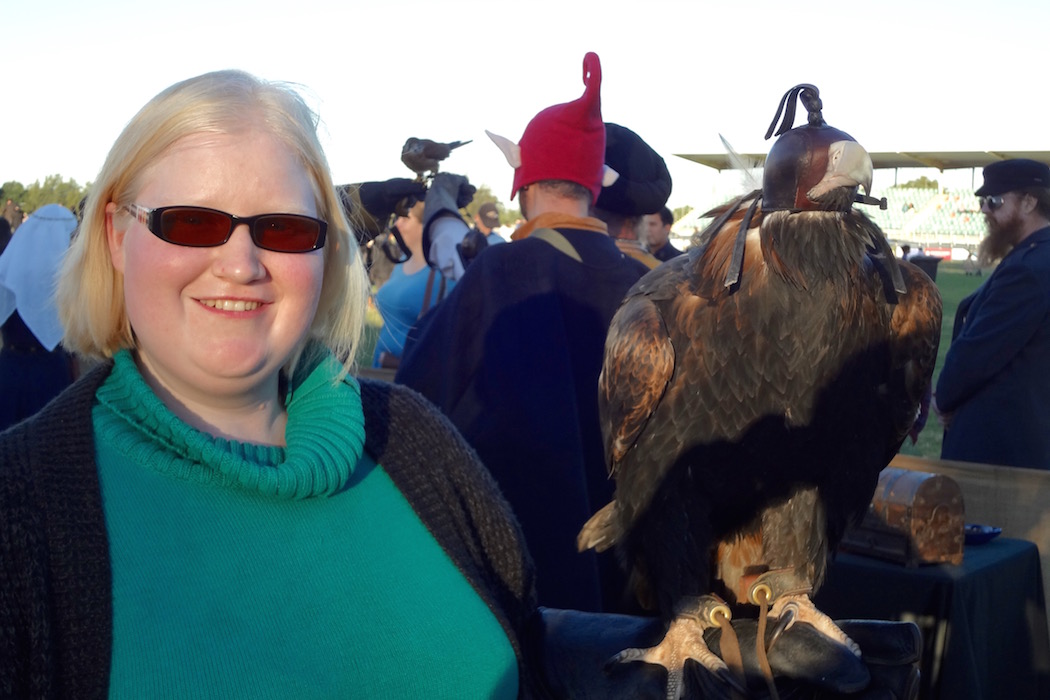 Many people look at the Middle Ages from a romantic point of view. It was a simpler time, a time without the stresses we face today and the Winterfest showed the Middle Ages in all its glory. When we got to the Hawkesbury Showgrounds, we walked along the food stands before taking a look at all the other stands that displayed many fascinating products. Especially figurines, small statues and clothing was plentiful and all in the medieval and fantasy style.

Some visitors also dressed up in medieval costumes, while others simply enjoyed watching them or taking pictures with them. Apart from stands selling figurines and other merchandise, the medieval village offered a variety of stands that presented how things were done in the middle ages. A black smith was forging iron nails, while a carpenter was making shields the old-fashioned way.

In some areas visitors were always able to find knights sword fighting, or fighting with axes. The archery stands were among my favorites. However, these displays ran the whole day and two in particular grabbed my attention. I really enjoyed the Birds of Prey show and the jousting display.

The Birds of Prey show involved a falcon, a hawk, an owl and an eagle. The birds were truly magnificent and as the speaker explained, their bodies are made for one thing and one thing only: hunting. It was beautiful to see the falcon and the hawk fly in circles around the audience and the area set up with the mock prey. They were also often swooping close over the audience before catching their prey.

I have never seen an owl in a Birds of Prey show before and so, seeing her was especially fascinating. The speaker explained, that despite the stereotype of the “wise owl”, owls are rather dumb compared to other birds. Her prey was a little remote-controlled car with rabbit ears on top. It was skidding across the grass, while the owl was watching and then hopping after it. The finale of the show was the eagle. However, the eagle didn’t seem to be in the mood to hunt and so it flew around for a bit, neglecting the mock prey, before landing on the trainer’s arm again.

After the show, I was able to go to the Birds of Prey stand and hold the eagle on my arm, which was a truly unique experience.
The final show of the day was a joust. Three knights on horseback were fighting against each other, the horses galloping towards each other and the lances meeting the armor of the other knight. With each break or splinter of the lance, the crowed was cheering. Jousting can actually look quite violent and it is very interesting to watch.

The day at the fair was absolutely fantastic and I think, I will be there again, when they return next year.

Follow my blog with Bloglovin It’s not every day that you will experience a restaurant at a tranquil location of Sydney’s Harbour National Park….