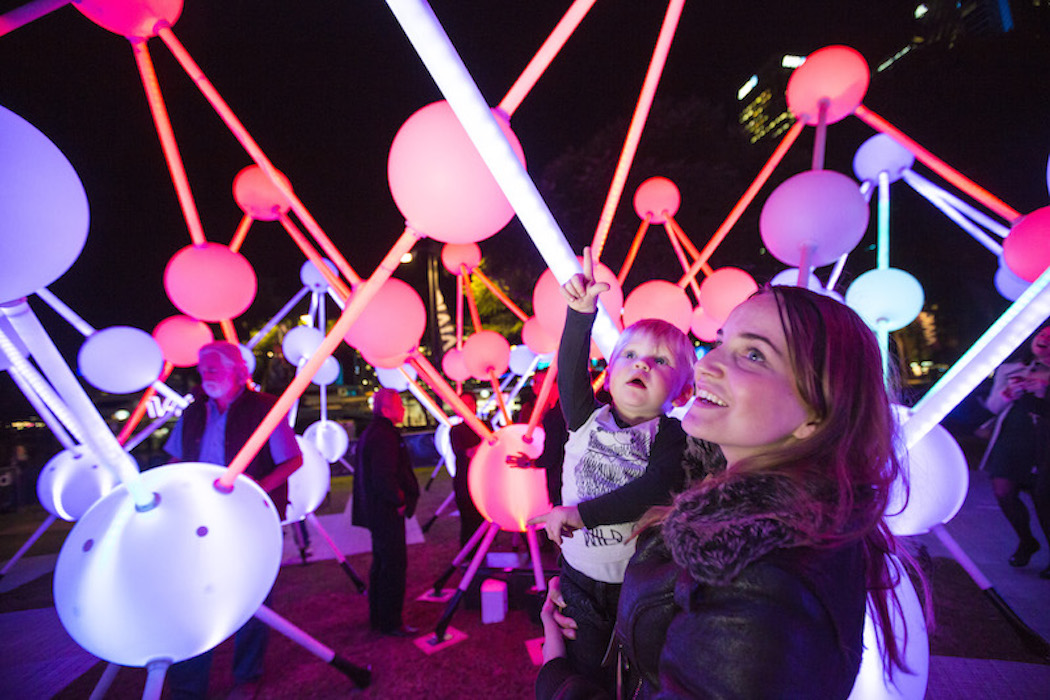 Vivid Sydney has even more in store for families this year, including the chance to walk with dinosaurs, a record number of light installations, new locations to explore – and an additional five days to pack it all into.

With the world’s largest festival of light, music and ideas set to run from 27 May to 18 June, Vivid Sydney organisers are encouraging families with children to visit early in the week and early in the evening to avoid late finishes for littlies.

Minister for Trade, Tourism and Major Events Stuart Ayres said: “Vivid Sydney ticks all the right boxes for parents – it’s family-friendly, fun, and mostly free. With this year’s festival set to run for 23 days, families will have more time to take in the growing number of attractions and locations for this much loved event, and to visit more than once for the ultimate Vivid Sydney experience.”

Top tips for families to enjoy Vivid Sydney:
· Come early in the week – it’s quieter Monday to Wednesday; and busiest on Friday and Saturday
· Arrive early in the evening – before the crowds grow and kids grow tired
· Come back – don’t try and fit everything into one visit
· Travel by public transport – leave the car at home and take advantage of extra bus, train and ferry services during the festival
· Come prepared – plan your visits beforehand.

0-5 years
Join the dinosaurs at WildLight – The BioKinetic City – Step off the bus or train at Chatswood and discover a world of digital dinosaurs featuring 3D animations of prehistoric creatures playing at The Concourse. Join in by taking control of mechanical dinosaur frames at the Exoskelton Encounter created by puppetry masters, Earth.
Victoria Street, Chatswood

Electric Jellyfish – Venture inside the spectacular dome and pluck, bounce or wobble electric light rings to create your own light and sound jellyfish – and watch it float across the surface.
Museum of Sydney

Be The Light for the Wild – Taronga Zoo lights up with giant, interactive animal lanterns ranging from the magnificent Asian elephant to the brightly coloured Corroboree frog. Families can interact with the larger-than-life lanterns which change colour and make sound in spectacular fashion.

Cathedral of Light – Take little ones on a mesmerising walk through a 70 metre long, eight metre high tunnel made from tens of thousands of LED lights in The Royal Botanic Garden. Enter through Queen Elizabeth II Gates via the Opera House forecourt.
Royal Botanic Garden

6-10 years
Spectrum– The kids can put their own creative stamp on this interactive light sculpture by tilting a line of multicoloured rods to form unique colour and pattern combinations.
The Rocks

Shadow Wall – Your shadow has never looked so bright! Watch your shadow come to life as a multicoloured silhouette as the interactive walls mirrors your movements.
Circular Quay

Dress Circle – The kids haven’t coloured in like this before. Add colour, light and patterns to the Circular Quay skyline using a 3D, touch-sensitive model – and see your creation light up Vivid Sydney in real time.
Circular Quay

Impossible Voyage – Take an interactive ride to strange and mysterious lands as one of Sydney’s oldest buildings is transformed into an imaginary vessel. Create a unique family journey as the light art responds to your movements, transporting you through changing landscapes.
Cadman’s Cottage, The Rocks

Silent Disco – Sshhh! The kids can burn off energy dancing to music that you don’t have to listen to! They simply pick up a set of headphones, select an audio channel and hit the dance floor with music only they can hear.
Central Park (Friday and Saturday, 6pm – 9:30pm)

Sound Bubble – A huge, transparent, inflatable cube with an artificial brain senses when visitors approach and reacts by sending out colourful light patterns and sound effects. The bigger the crowd, the grander the display.
Circular Quay

U-Tube– Your family can leave a mark at this interactive sculpture, literally. You’ll form coloured shapes on the wall and leave an imprint by pushing your face, hands or whole body against the surface.
Circular Quay
Robowars returns – for one day only. Robots big and small and built by hand from metal, power tools and toy parts battle it out in an epic showdown on 5 June. Tickets are limited. Visit www.vividsydney.com for details.
Circular Quay

It’s on, Etihad Airways is offering up to 50% off its Business Class fares to a world of exciting business and holiday destinations. The…