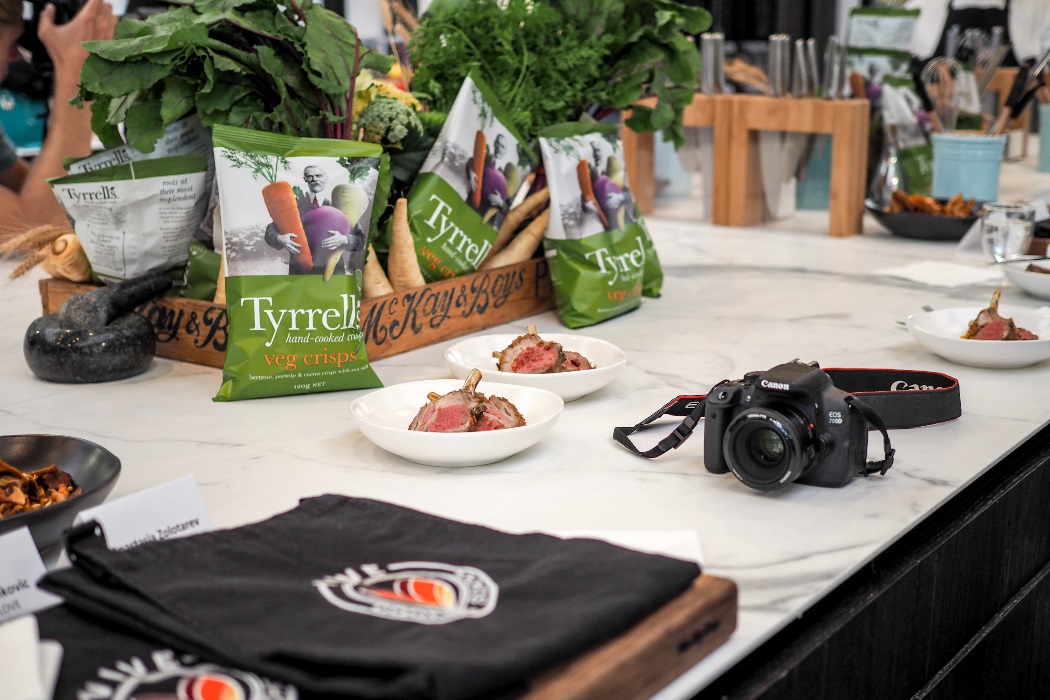 Tyrells and Scott Davis give ordinary ingredients a Hipchips makeover

Take a Michelin-Starred chef and give him a bag of crisps. That’s exactly what the team from Tyrells did when they approached Scott Davis, renowned chef and owner of the world’s-first crisp restaurant – London’s Hipchips.

I’m both surprised and amused by each of the three dishes presented by Davis. On the surface they appear quite simple, and are types of dishes that I frequently enjoy preparing in my own kitchen at home. The genius lies in the technique and skill behind each. Tyrell’s Veg Crips are crushed and combined with grated root vegetables, turmeric, chilli and spring onions, then rolled and fried to form delicious spicy morsels served with a tangy dipping sauce. They remind me of pakoras which my parents make to serve with afternoon tea. The crisps are paired with sweet cardamom to form a crunchy crust on tender french-trimmed lamb cutlets that are served with a sweet and gently spiced corn sauce. The lamb is blushing and we all crave the sauce. Finely crushed crisps add a sweet and salty topping to peanut butter biscuits served alongside a dark chocolate crème brûlée.

Link to the recipes

“Crisps aren’t the most conventional ingredient, so to create more from something unexpected really excites me,” says Davis. “And when you start with a great, hand-cooked product, the end result is so special.”

Following Chef Scott’s step-by-step directions we were then split into teams and I had the pleasure of cooking with Alex McDivett from Better Homes and Gardens. It was fun getting our hands dirty, wearing the supplied gloves of course (couldn’t risk staining my camera), as we mixed the ingredients for the fritters and formed them into delightful morsels. What do you think of our finished result?

It’s been a couple of days since the event and I’m not gonna lie, I’ve grown quite fond of the Veg Crisps. No two chips are the same shape or size which adds to their surprise and allure. They’re hand-fried right in Victoria’s Yarra Valley and a simple sprinkling of sea salt allows the sweet earthy tones of the beetroot, carrot and parsnips to shine.

“Tyrell’s quintessentially English recipe celebrates the traditional way that crisps are meant to be cooked – with their jacket on – making a huge difference to the taste experience,” says Davis.

Find Tyrells Veg Crisps at Coles Supermarkets now for $4.49 RRP. I want to say a big thank you to @travel.lifestyleblog for inviting me to guest-review for this event and thanks Chef Scott and Tyrell’s for the wonderful experience.

Guest Blogger: Brendon D’Souza. Known by his pen-name Brendon The Smiling Chef, Brendon D’Souza is a Sydney-based freelance writer, photographer and food stylist who occasionally dabbles in singing and acting. Keep up-to-date with all his tasty adventures at www.brendonthesmilingchef.com,

@brendonthesmilingchef *all images from Brendon.

Five reasons why you should visit Japan – Kayak.com.au

With jaw-dropping scenery, state-of-the-art architecture, mind-blowing technology and mouth-watering food, it’s easy to understand why Japan is the place to go in 2017. According…