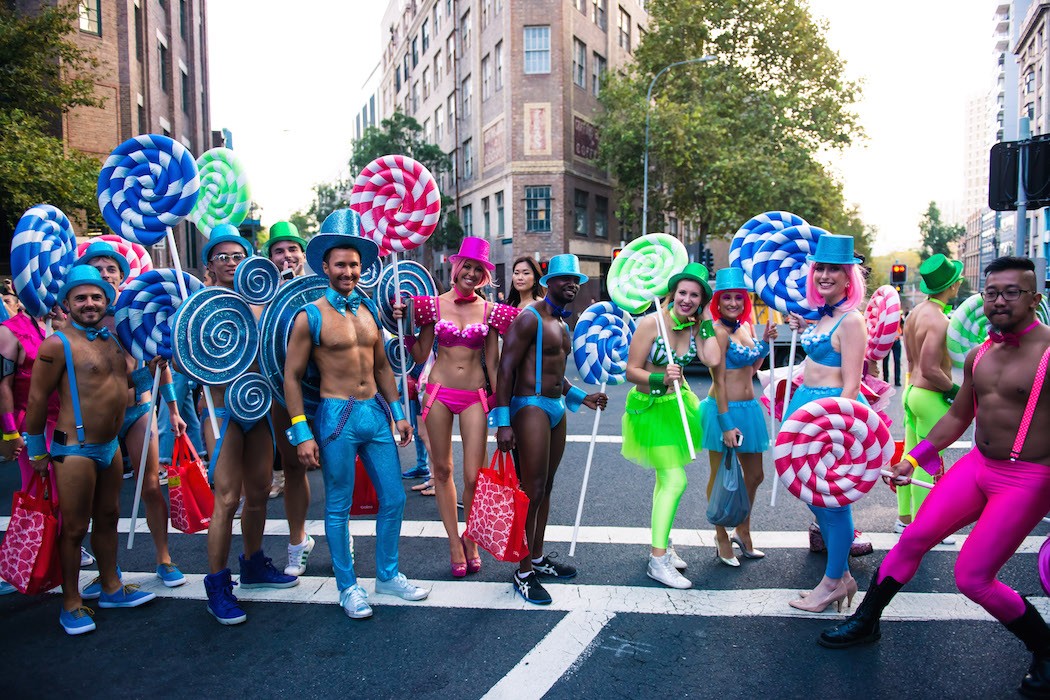 The Sydney Gay and Lesbian Mardi Gras Festival is back. The Festval kicks off on Friday 19 February and runs for two weeks, until Sunday 06 March, 2016; with a jam-packed program of events, performances, exhibitions and activities.

The 2016 theme is ‘MOMENTUM’, evolving from Mardi Gras history in the fight for social justice and self expression.

Fair Day: Sun 21 Feb, 10am – 8pm, Victoria Park, Camperdown [MAP]
A free, fun filled celebration of LGBTQI family and community day from pooches and Pad Thai, to markets and music; dancing and drama, to rides, comedy, and crazy fun for the kids; Fair Day is for the whole family.

The Harbour: Wed 24 Feb – Sat 27 Feb, 6pm – 11pm, Mrs Macquarie’s Point [MAP]
An epic series of film, talks, concerts and musical spectaculars, glittering from our favourite shore. Headlining the series is In Bed with Madonna, presented by Queer Screen to celebrate the film’s 25th Anniversary! Australian pop icon, Tina Arena will perform an intimate concert at Tina Arena at The Harbour with all the classics like: I Need Your Body, Chains, and I Want To Love You. There will be a Sing-a-long with the Sydney Gay and Lesbian Choir to the film Mamma Mia as well.

The Parade: Sat 5 Mar, 7pm – 10.30pm, Oxford and Flinders St, Darlinghurst [MAP]
The Sydney Gay and Lesbian Mardi Gras Parade is back for its 38th year! Over 200,000 people will line the streets of Sydney’s traditional Gay and Lesbian district in support of the 10,000 fabulous parade entrants who have united for a glittering spectacle of sparkles and self-expression.

The Diamond Club: Sat 5 Mar, 6pm- 10.30pm, Taylor Square 195 Oxford St, Darlinghurst [MAP] Diamond Club is available to everyone for the first time to enjoy the spectacular views and experience of the Parade at Taylor Square. With private bars, gourmet food, raised platforms, and toilets, this is truly the best place to watch the 2016 Parade.

Rainbow Room: Thur 2 Mar – Sat 5 Mar, 7.15pm – 9.30pm, Sydney Opera House [MAP] Mega-watt stars of Australian drag Courtney Act & Trevor Ashley team up for their Gentlemen Prefer Blokes, Seven-Year-Itch reunion tour, and take on some of history’s greatest duos as a part of the Rainbow Room. For three nights only the Sydney Opera House will transform into a hot-bed of comedy, chaos and cabaret as a line-up of stars take to the stage to paint the sails rainbow.

The Pride: Fri 5 Feb – Sun 6 Mar, 8pm, Eternity Playhouse, 39 Burton St, Darlinghurst [MAP]
Alexi Kaye Campbell’s award-winning theatre piece promises to be a remarkable reflection on society’s journey towards sexual attitudes, both past and present. Oliver and Phillip fall for each other but are forced to be strangers to both desire and to themselves

iOTA: Thur 3 Mar – Fri 4 Mar, Oxford Art Factory, 38-46 Oxford St, Darlinghurst [MAP]
With Mad Max: Fury Road and The Great Gatsby under his belt, iOTA will put on a show just as high octane and memorable as his on screen performances. Combining musical talent, amazing theatrical presence, and outrageous outfits, this will be an unforgettable showcase of old favourites as well as hits from his brand new album ‘Wolf Number Nine’.

The Official Mardi Gras Party: Sat 5 Mar – Sun 6 Mar, 10pm – 8am, Hordern Pavilion [MAP]
Over 12,000 partygoers from all over the world, this is the largest LGBTQI party in the Southern Hemisphere held at the Entertainment Quarter. Shiny and spectacular, the Party is a piping hot line-up of local and international DJ’s, shows, and world class production and performance by Aussie Courtney Act.

The Laneway: Sun 6 Mar – Mon 7 Mar, 2pm, The Beresford Hotel, 354 Bourke St, Surry Hills [MAP]
Send off Mardi Gras with a bang in the final event. A cherished tradition of the Festival, The Laneway has evolved from a portable stereo on Hill St to a full blown street party. Expect live music, diva drop-ins, pop-up shows and world class DJs across a mix of indoor and outdoor spaces.

Silent Disco Tours: Sun 21 Feb – Fri 4 Mar, 2pm – 7.30pm
Get outside and make the streets of Sydney a dance floor with Silent Disco Tours, a series of one hour magical disco adventures at Sydney hot spots from Saturday 21 February to Friday 4 March 2016. Don disco gear and a set of special discoD headphones to ‘Get Physical’ with new and old favorites.

Conchita – From Vienna with Love: Thurs 3 Mar, 8pm – 10.30pm
Bearded beauty and 2014 Eurovision Song Contest winner, Conchita Wurst, is teaming up with Sydney Symphony Orchestra to bring her new show From Vienna with Love to Mardi Gras. Rising like a Phoenix from the steps of the Sydney Opera House, Wurst will be joined by special guests Courtney Act, Trevor Ashley and Paul Capsis at the Concert Hall.

Disco Climb: Thur 25 Feb – Wed 9 Mar, 10am – 7pm
Break out the hairspray and blue eye shadow for 80s themed The Mardi Gras Disco Climb. This is Sydney’s highest disco dance party, with retro track list; climb leader guides; and the most fabulous ascent over Sydney Harbour Bridge, from Thursday 25 February – Wednesday 9 March 2016.
The most stylish run in Sydney, the Little Black Dress Run, returns to Darling Harbour on Sunday 28 February 2016. Rock your frock for the 3km run/walk around Darling Harbour in the name of charity. The event has become a “must do” for the Mardi Gras season, so frock up and stretch out those hamstrings and heels!

Stamp collecting is far more risky than you think… Sure Foot Productions in association with New Theatre are delighted to bring Theresa Rebeck’s fast-paced,…