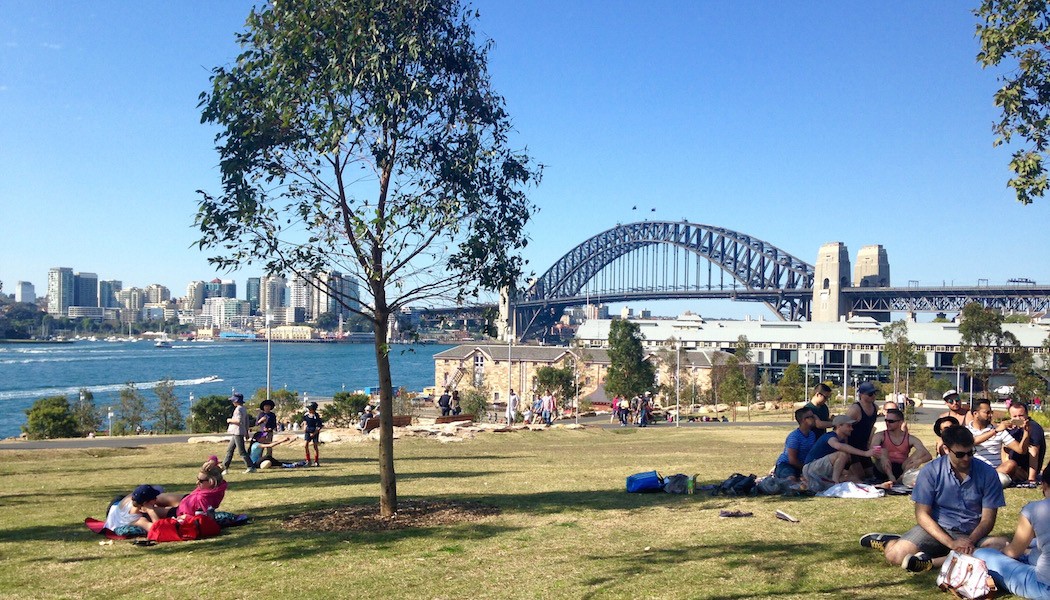 A part of Sydney’s foreshore has been unlocked to the public for the first time in 100 years, and yesterday hundreds gathered to explore this hidden gem that has been returned to the community.

Barangaroo reserve is a six-hectare park that until recently was used as a dockyard, it now has been turned into a place where families and people of all ages will find enjoyment in the exploration of the headland, the naturalistic harbour and the prominent sandstone foreshore. The Barangaroo Welcome Celebration, is a three-month event, that occurs every Sunday which invites the public to discover this hidden treasure with free entertainment, different art installations each month, food stalls and performances by some of Australia’s leading musicians and entertainers. The welcome celebration aims to inform the public about the stories of Barangaroo and its people. With each month focusing on a different theme: Stone in September symbolising the Indigenous traditions and culture. Sea in October is trade, labour and multiculturalism and sky in November is about concentrating on the future possibilities of the re-born harbour headland park. Elizabeth McIntosh, 73, a long-time Sydneysider said an event such as this one is inspirational and believes the way they’ve set it up makes people far more interested in Indigenous culture.

“Especially with all the eye-catching sandstorm formations and the fact its not far from the historical Goat Island,” Mrs McIntosh said. The sunny day left the people cheerful as the Spring heat added to the enjoyment of the festivities; Barangaroo reserve was bursting with life and exuberance. Andrej Popovic, 22, said everyone has the right to learn about the history of places like Barangaroo and presenting that through art, music, and tours is an insightful way to do so.

“It shows the history behind this location in Australia before the British settlers came in and this helps us build a connection to the land just like the Indigenous community did,” Mr Popovic said.

The headland park is also part of a $6 billion redevelopment that will house a hotel, casino, retail and residential space. However, members of the community are discouraged by the further plans for the reserve as they believe it will ruin the naturalistic character of Barangaroo. Mr Popovic said that he believes it’s a shame that there will be something like a casino right near such a place filled with heritage as it holds so much history and ruins the meaning behind Barangaroo and what it stands for.

“It stands for as a representation of a piece of Indigenous Australia, you’re putting a casino next to it, it’s clashing to very different motives. One about awareness and history, the other about gaining money.” “Casino doesn’t match the indigenous theme of Barangaroo, this is natural, and casino is man-made, gambling and money doesn’t go at all with a place like this,” Mrs McIntosh said.

It is clear that Sydneysiders of all age demographics have a common belief that a naturalistic park with such an elaborate history should not be made commercialised to make profits. Its beauty remains in the fact it is such a beautiful sight to go see on the weekends and its open to anyone in the public as it’s for free. With an influx of the these proposed developments, its hard to see the place for its benign purpose to educate the public about the Indigenous history that is associated to it. Ajsa Stulanovic: A third year journalism student from UWS and as a young child had a love for writing stories and that passion continues to this day. A Sydney-sider for the past year and a half and before that have spent a majority of her life on the Gold Coast, QLD. All photo taken by Ajsa.

Travel & Lifestyle has teamed up with No Comment Sydney and Bacardi to invite you to Miami Paradise Party this Friday 17 August. NO…