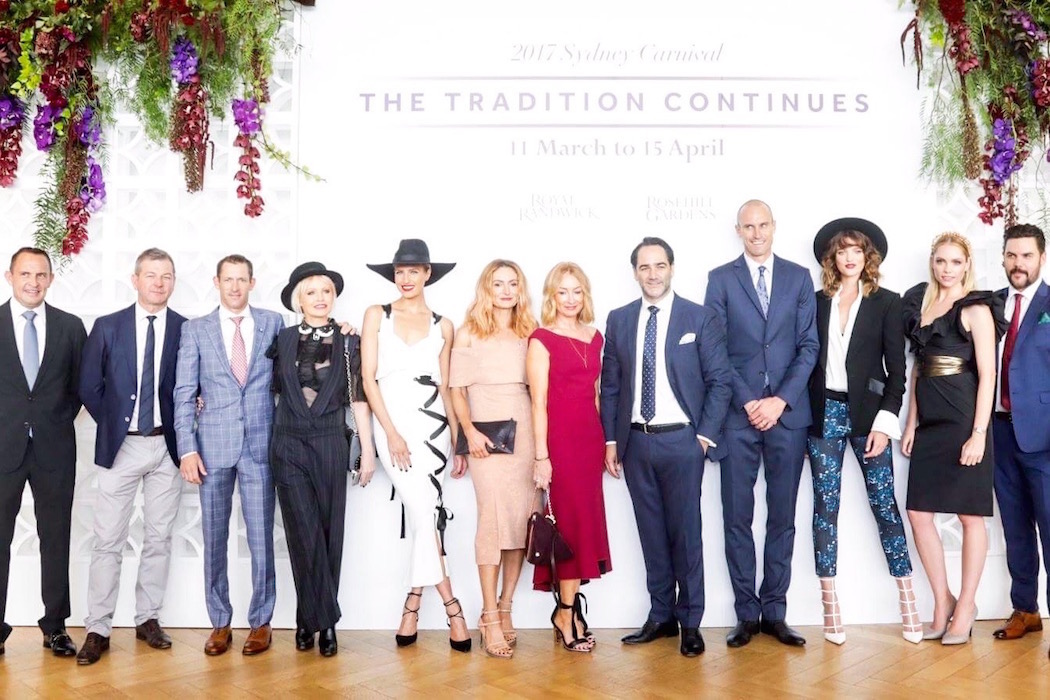 The last time I went to Royal Randwick was around the same time last year for the Autumn Racing Carnival. I had such a blast learning how to punt (make a bet), get dressed up and sip Moet & Chandon with friends. A day at the track is one of Australia’s great traditions filled with colour, style and adrenaline of raceday, whilst having fun with family and friends.

At this years media launch, we were originally going to meet at the Theatre of the Horse, but due to the unstable wet weather, I was lucky enough to check out the Longines Owners Pavilion. Let me just say, what a beautiful venue and great view of the theatre.

The Australian Turf Club launched its 2017 Sydney Carnival ahead of the six weeks of world-class racing and entertainment at Royal Randwick and Rosehill Gardens. Here we were joined by some of the racing industry’s biggest stars, ambassadors in fashion, sporting and cuisine, in true racing and signature style.

The Sydney Carnival features two of Australia’s biggest and most coveted racing events, the Longines Golden Slipper Carnival at Rosehill Gardens, and The Championships at Royal Randwick, plus the Longines World’s Best Turf Horse, Winx.

Over six weeks from 11 March to 15 April, this year’s Sydney Carnival promises non-stop action and excitement on and off the track. This year also marks the 25th anniversary of Royal Randwick officially becoming a ‘royal’ racecourse, as endorsed by Queen Elizabeth ll.

On the track, all eyes will be on Longines World’s Best Horse on Turf, and World’s Best Mare, Winx who is set to face the starter on two occasions over the six week period. The champion five-year-old is aiming for the Group 1 $1million George Ryder Stakes on Longines Golden Slipper Day as well as Sydney’s richest Autumn race over 2000m, the Group 1 $4million Longines Queen Elizabeth Stakes on The Championships Day 2.

Punters are encouraged to wear a touch of royal blue to support Winx on that day in what will be her final race for the autumn season.

Returning for the fourth year, Little Sydney will be welcomed to Royal Randwick over the two days of The Championships (1 & 8 April) offering food lovers a unique culinary trackside experience. The 2017 renewal will see new restaurants Victor Churchill and Catalina join China Doll on course.

Synonymous with racing, fashion will again be showcased with the return of The Fashion Chute presented by TheRaces.com.au. On course for four days over the Sydney Carnival, fashion forward racegoers are invited to enter the competition via a photo activation at The Chute with eight preliminary finalists chosen each day to contest the finals at The Championships Day 2 Longines Queen Elizabeth Stakes Day at Royal Randwick.

This year, the Australian Turf Club has a Golden Carnival Pass ticketing offer giving racegoers access to all six 2017 Sydney Carnival days for $30. All pre-purchased tickets will include integrated rail to both Rosehill Gardens and Royal Randwick. Integrated buses to the city and Bondi will also be included in the cost of a ticket.

Situated within the heart of Kings Cross is The Silly Tart Kitchen, a new café-style restaurant putting a spin on country kitsch and comfort…