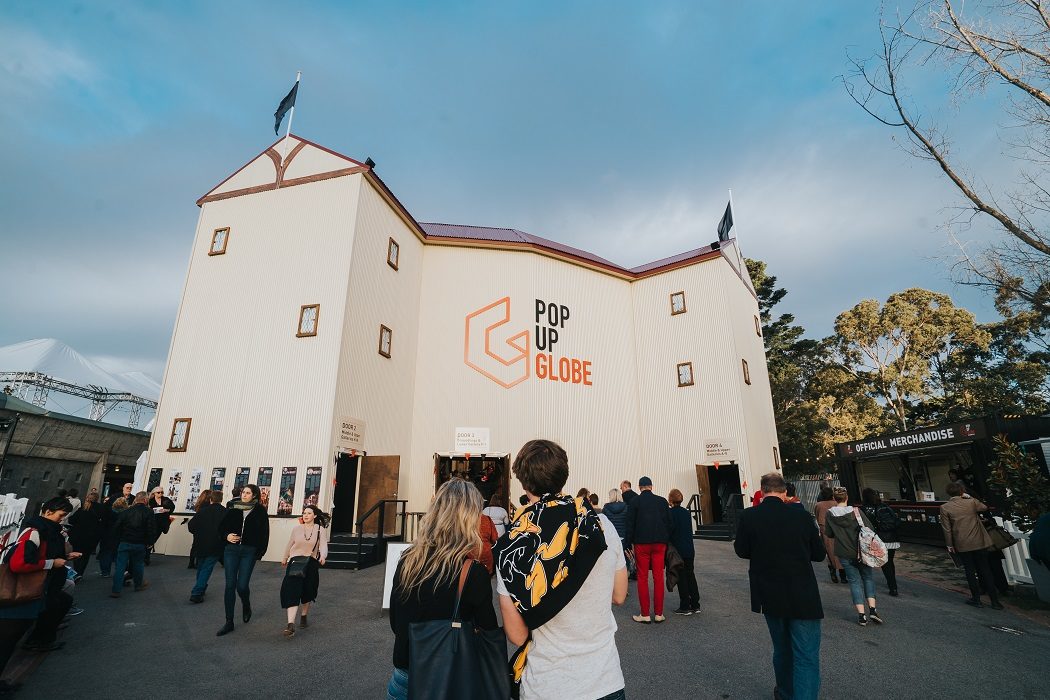 After performing to an astonishing 450,000 people in just two years, the world’s first full-scale temporary working replica of one of the greatest theatres in history, the second Globe, will soon pop up in Sydney’s Entertainment Quarter.

The creators of Pop-up Globe, together with representatives of Live Nation, NAB, and Entertainment Quarter announced today that the world’s first full-scale temporary working replica of the second Globe, the theatre Shakespeare and his company built and opened in 1614 after the first Globe theatre burned to the ground, will pop up on the Show Ring at Sydney’s Entertainment Quarter.

For six weeks only, Pop-up Globe will present a spectacular festival of Shakespeare unlike Sydney has ever seen before.

In just two years, Pop-up Globe has become one of the most popular new theatres ever, drawing audiences of more than 450,000 people in the first 24 months including more than 150,000 attendances at its critically-acclaimed season in Melbourne earlier this year.

Pop-up Globe Founder and Artistic Director, Dr Miles Gregory, says he believes Shakespeare’s work performed in the space it is written for is a completely unique and transformative experience.

“Our audiences are blown away by the immersive experience of seeing Shakespeare performed in the space for which it was written. The relationship between actor and audience, the spectacular space itself, together with the power of Shakespeare’s incredible work, means attending plays at Pop-up Globe is totally different from anything you’ve seen before,” says Gregory.

The first Globe stood for 14 years until a disastrous fire demolished it in 1613. The second Globe was rebuilt on the same foundations by Shakespeare and his company significantly modifying the original first Globe to create what became one of the most famous theatres in history. Pop-up Globe uses as its historical reference point ground-breaking research by Associate Professor Tim Fitzpatrick and Russell Emerson of the University of Sydney to create the world’s first full-scale temporary working replica of Shakespeare’s theatre, the second Globe.

Pop-up Globe is a three-storey, 16-sided, 900-person capacity theatre. It unites cutting-edge scaffold technology with a 400-year-old design to transport audiences back in time. No matter where they sit or stand in the theatre, audience members are never more than 15 metres from the heart of the action on stage. Sometimes they’ll even find themselves in the play.

The audacious project was originally planned as a one-off in Auckland to celebrate the 400th anniversary of Shakespeare’s death in 2016. Created entirely from scratch by an international company and cast in less than 18 months, Pop-up Globe took the city by storm welcoming more than 100,000 attendees in a season extended twice by popular demand.

Following hot on the heels of this initial sell-out success, a critically-acclaimed season in Melbourne and two further seasons in Auckland have attracted another 350,000 attendances. The phenomenon resulted in international interest from leading promoters and representatives from cities around the world who travelled to New Zealand to witness it for themselves.

Live Nation, the world’s leading live entertainment company, jumped at the chance to work with Pop-up Globe to secure this unique theatre experience for Australian audiences.

Luke Hede, Vice President Live Nation Australasia said, “Live Nation has a great history of presenting only the very best live performances and we are thrilled to be able to bring this extraordinary production to Sydney audiences after our wonderful Melbourne season. Pop-up Globe is the most exciting theatre project we’ve seen in a long time and even more exciting that it is coming out of our part of the world”.

The Pop-up Globe theatre will be constructed on the Show Ring at Entertainment Quarter over a period of six weeks, and will feature all the spectacular theatrical trickery of the Jacobean era, including riotous comedy, gruesome battles, litres of fake blood, hand-forged armoury and more than 450 beautiful bespoke period costumes pieces specially constructed by the Pop-up Globe in-house wardrobe department. Capped with an onion dome, Pop-up Globe will be a remarkable feature of the Sydney cityscape, just as the second Globe was in London.

For its Sydney season, Pop-up Globe brings with it a festival of four critically-acclaimed productions – magical fantasy, A Midsummer Night’s Dream, haunting blood-soaked tragedy, Macbeth, controversial comedy The Merchant of Venice, and laugh-out-loud slapstick The Comedy of Errors.

The season starts from the 5 September 2018

A Midsummer Night’s Dream
Justly regarded as Shakespeare’s comic masterpiece, A Midsummer Night’s Dream enchants audiences with a brilliant mix of hilarious comedy and beautiful poetry. See Pop-up Globe’s all-male Buckingham’s Company in a production which fuses spectacular Jacobean costumes and the lyrical poetry of Shakespeare with Māori folklore and language alive in an ancient forest.

Macbeth
A haunting and timeless tragedy that explores the darkest corners of the human mind set in a world where the supernatural is real and the quickest way to the top is by murder. Macbeth, presented by Pop-up Globe’s
mixed Southampton’s Company sees darkness, chaos and conflict unfold.

The Comedy of Errors
Presented by Pop-up Globe’s mixed Southampton’s Company, Shakespeare’s most hilarious farce The Comedy of Errors brings together two sets of twins in a wild romp. See chaoticconfusion and unlikely plot twists come together in a side-splitting finale that cannot be missed.

Time to celebrate with Etihad Airways as they extended its free Abu Dhabi stopover campaign to the end of the year. Travellers flying through…