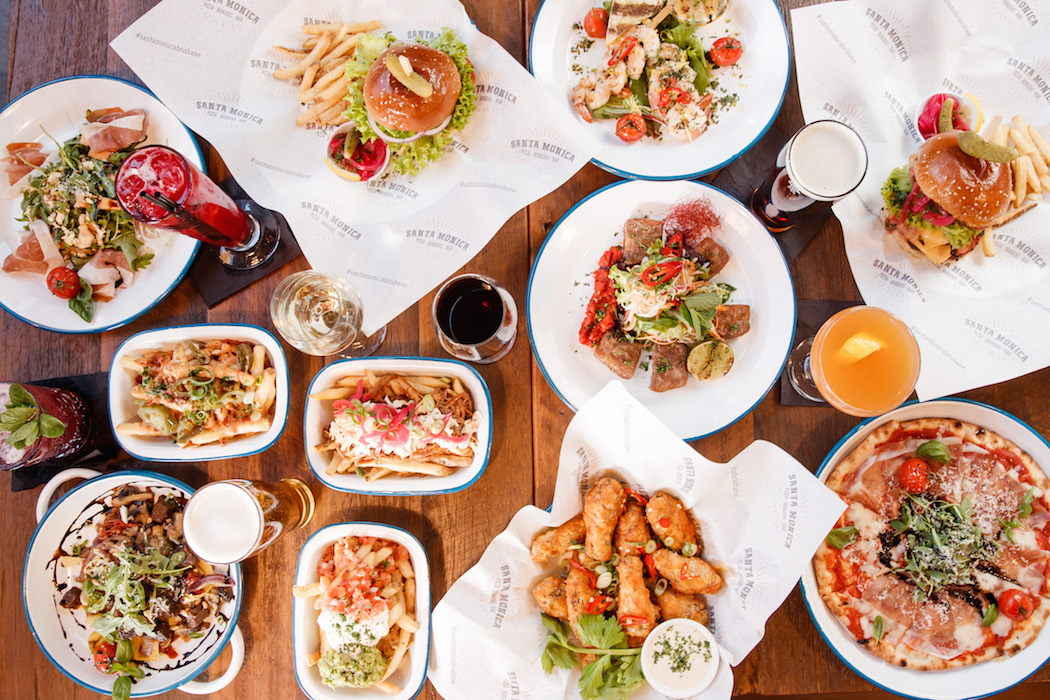 Continuing to use their traditional Sicilian heritage as a culinary muse, and their passion for Brisbane as their canvas, the Petroccitto Family have unveiled their latest gathering place – introducing Santa Monica Brisbane, an Italian-American pizza, burger and cocktail bar that’s set to bring a new street style vibe to the CBD dining scene.

German brothers Erkan and Hakan Karakol, who together bring a shared pool of Michelin starred experience, university qualifications in business and round-the-world travel to create a next-level eats and drinks dogma, Californian-style, to Santa Monica Brisbane.

Boasting a bespoke fit out and custom-created artwork, Santa Monica Brisbane celebrates the climate in true supercool sidewalk style. And, like it’s namesake, which is home to Dogtown skateboard culture, Ocean’s Eleven, that iconic beachfront and pier and a wicked reputation for effortless dining, Santa Monica Brisbane features a menu that is flavour-filled, uncomplicated and bang on trend.

With its signature Pizza Oven at the heart of the kitchen, pizzas are an absolute specialty – and rather than a lineup of licorice all-sorts, there are six celebrated and authentic types. There’s the Santa Monica Seafood Pizza ($26) with mozzarella, prawns, smoked salmon, capers, red onion, crème fresh & dill, or dig in to the BBQ Meatlovers ($24) packed with pulled pork, bacon, pork sausage, napolitana sauce, mozzarella and topped with BBQ sauce.

The burger lineup has been created in a similar fashion – seven west coast wonders; from the Classic Cheese Burger ($11) to the cheeky Pulled Pork Baguette (14), and in a tasty nod to the sister city, the Santa Monica Shrimp Baguette – brimming with lemon pepper shrimps in a Santa Monica-style French roll topped with Remoulade sauce, oak lettuce, tomato and picked red onions.

From the two foundation menus, Santa Monica Brisbane offers other simple flavour dishes – there’s three pastas on offer (and given the group’s heritage, you know this pasta is life changing), four hearty salads (all worthy of single-dish s

Anytime desserts – over coffee, as a late night taster or for that sweet full stop a dining experience – come as three types – the Warm Chocolate Brownie, Cannoli Di Ricotta and the classic Santa Monica Banana Split.

Putting pay to the Brisbane adage that breakfast is the new black, Santa Monica is opening with an All Day Breakfast Menu. In a crossover of contemporary classics and new discoveries, it’s a top ten of cool indecision. From the Santa Monica Breakfast Burger ($9) to a Power Breakfast of Bircher Muesli ($12), a serve of Monica’s Pancakes ($16), even an Italian Baked Egg ($14), and more – dress them all up with sides of bacon, salmon or Portobello mushrooms.

Traditional Thai at Spice I am

Spice I am is by far and away one of my preferred Thai restaurant I have found within the Sydney CBD area. If you…