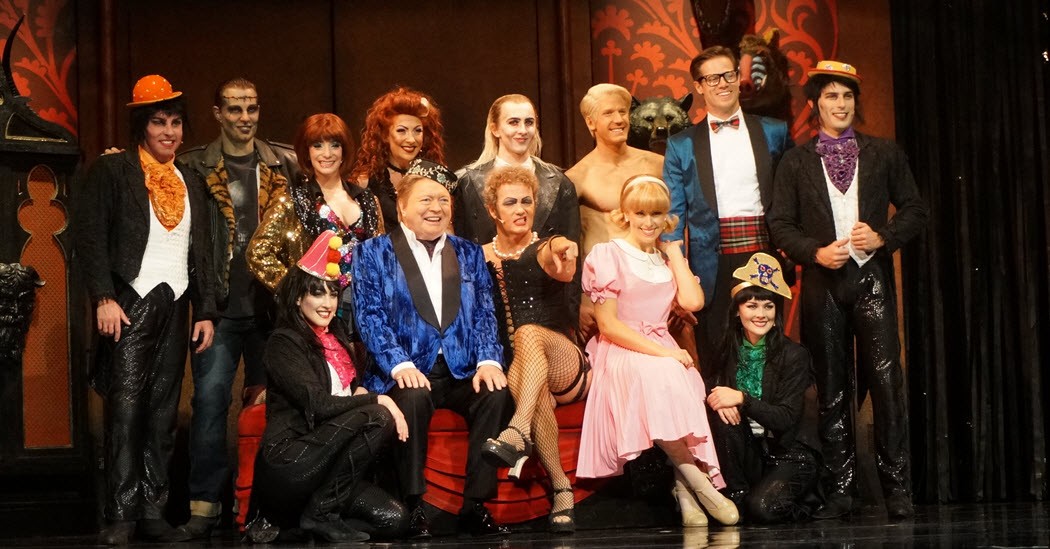 Sydney, the wait is over. Australia’s new 40th Anniversary production of Richard O’Brien’s The Rocky Horror Show, which received huge acclaim during sell out seasons last year in Brisbane, Perth, Adelaide and Melbourne, opens tonight at the Sydney Lyric Theatre.
A glittering crowd will celebrate the 40th anniversary of this iconic musical tonight, including Danielle Spencer, Luke Burgess, Carmen Duncan, Erika Heynatz, Todd McKenney, Erin Holland, Lucy Durack, Nathan Joliffe, Dan Wyllie, Ben Mingay, Caroline O’Connor, Bonnie Lythgoe, Nic Westaway, Kerri-Anne Kennerley, Richard Wilkins, Lisa Wilkinson, Osher Gunsberg, Kate Peck, Tim Robards and Anna Heinrich, and members of the original Australian 1974 cast of The Rocky Horror Show – Kate Fitzpatrick, Sal Sharah, Maureen Elkner, John Paramor, Jane Harders and Terry Bader.
In the coveted role of Frank N Furter is television and theatre star Craig McLachlan, who won the 2014 Helpmann Award for Best Male Actor in a Musical for this performance. Beloved theatre and television performer Bert Newton plays the Narrator, and the cast also comprises Amy Lehpamer and Stephen Mahy as Janet and Brad, Kristian Lavercombe as Riff Raff, Jayde Westaby as Magenta, Angelique Cassimatis as Columbia, Nicholas Christo as Eddie and Dr Scott, and Brendan Irving as Rocky. Completing the cast are Nicholas Eaton, Meghan O’Shea, Suzanne Steele, Darren Tyler and Drew Weston.
Producers Howard Panter and John Frost are thrilled with the success of the show and their stellar cast. “This is the performance of a lifetime from Craig McLachlan. As the reviews from interstate and his Helpmann gong attest, Craig was born to play Frank. With Craig and Bert leading this wonderfully talented group of performers, this is a wild and sexy night out, a night to remember for a very, long time.”

“STILL THE FUNNIEST AND SEXIEST SHOW AROUND” – Evening Standard

The Rocky Horror Show is a true classic and one of theatre’s most endearing and outrageously fun shows. It opened at London’s Royal Court Theatre on June 19, 1973, quickly developing a cult following, and was adapted into the 1975 film The Rocky Horror Picture Show, which has the longest-running release in film history. This iconic brand holds a unique place in theatre history, a show which has defied the decades and continued to grow in popularity. In 2010 the music of Rocky
Horror was showcased in the smash hit TV show Glee, seen by over 20 million people worldwide. Rocky Horror even has its own postage stamp.
Millions of people all over the world have and continue to see productions of The Rocky Horror Show and sung along to classics like Sweet Transvestite, Dammit Janet, I Can Make You A Man, Touch-a Touch-a Touch Me, Over At The Frankenstein Place and of course The Time Warp.

*An additional transaction fee and/or a credit/debit payment processing fee may apply.