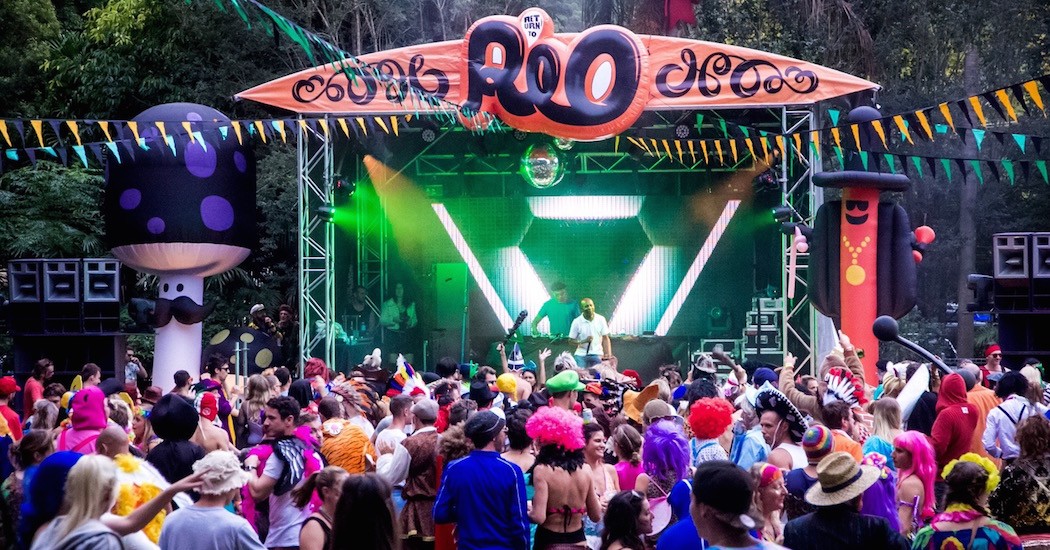 This November 13 – 15, Australia’s best boutique weekender, Return to Rio is returning for the fourth fabulous edition. Over two days and three nights, Riopians will be rewarded with more fun and frivolity than you can shake a stick at.

With two stages programmed with the world’s best DJs, the stunning backdrop to this ultimate weekend away brimming with madness, magic and mayhem is the Del Rio Riverside Resort in Wisemans Ferry. The banks of the Hawkesbury River play host to the country’s most colourful fancy dress party and the friendliest festival crowd known to man with all the action centered around the azure waters of a tropical pool.

Soul Clap, the Boston boys Ely and Cnyce, who just like Return to Rio, are known for pushing new boundaries, will be headlining the weekend’s proceedings. Always travelling through time and space, on a mission to change the world one dance floor at a time, will be bringing their funk, disco and garage get-up down under. Backing up the bill, is the recently appointed resident of Berlin’s iconic Watergate, Matthias Meyer, a key member of the influential Liebe*Detail crew, who will be winning over the hearts and minds of the Return to Rio crew with his rich, energetic club music inspired by the sounds of Detroit and Chicago.

Rio resident, Mr C of the Shamen and Ebeneezer Goode fame, will be gracing the decks once more promising another sprinkling of his house and techno gusto. Founder of one of London’s best-ever clubs, The End, Richard West AKA Mr C will be staying for the whole weekend. With two secret cabin sets last year on top of his main stage billing, who knows what could happen when he arrives to town?

“I keep coming back to Australia each year for Return to Rio, it’s simply one of the best festivals worldwide. I’m looking forward to this family reunion and getting back amongst it.” Mr C, comments.

Pulling out all the stops for the Riopians dancing pleasure, the promoters are dishing up three of Burning Man’s finest. First up, is Davi. Hailed as LA’s best kept secret and the next Maceo Plex, this DJ and producer is making massive waves internationally following game changing releases on Crosstown Rebels and Anjunadeep. The second amigo is Atish. Known for his melodic house, the Robot Heart regular will be bringing the heat and beats of the Nevada desert to the event. Atish’s pure passion for DJing has taken him on a journey around six of the seven continent’s best clubs, festivals, and afterhours parties. Joining this terrific trio of talent is Hoj. As one of Lee Burridge’s partners in crime for ‘All Day I Dream’, Hoj sets out to create mischief in all his creative endeavors and his music is deep and sexy in a way that encourages crowds to create a little mischief of their own. His sound earned him a night at Berlin’s legendary Panorama Bar and was one of the founding members of the Opulent Temple at Burning Man. In recent years his sets atop the Robot Heart bus have become legendary in their own right.

Rounding up this almighty artist announcement is the Riopians, who as part of their commitment to joining the fun must bring a random act of kindness for their fellow friends. Defined as a spontaneous, selfless act designed to make people smile, the initiative is inspired from other enchanting experiences around the world. Now those attending Return to Rio can get involved, as guests are encouraged to do something spectacular to surprise and delight their campmates.

To maintain the intimate vibes and top-notch crowd, the promoters don’t want it to be too easy for just any Tom, Dick or Harry to get a ticket, it’s all about chatting to people – asking the fun loving people in the community if they have the lowdown on where to get a much lauded golden ticket.

Ricky Cooper, Return to Rio Promoter comments: “What started out as an epic pool party has now turned in to the most fun weekend in Australia. We are keeping it small as no one likes to walk for miles, queue for ages to get a drink at the bar, or have to face a feral port-a-loo. We pride ourselves on having no idiots in attendance and November’s line-up is something I’m personally really proud of. The music is going to be world class.”

In addition to the music, an action packed itinerary of alternative amusement will be on offer. From water aerobics, meditation, pilates, yoga, tennis, crazy golf and volley ball, Return to Rio has it covered. Oh and if that wasn’t enough, a giant jumping cushion and water skiing is also there for guests’ merriment.

Accommodation options, all available for an additional cost, include:

Golden tickets are available now on the melodic grapevine… seek and you shall find friends. Any remaining tickets will be on general release from Wednesday August 5 2015 via Ticketbooth.

The Darling Hotel has taken out top honours for the coveted ‘Luxury Accommodation’ category at the NSW Tourism Awards held in Sydney, beating a…