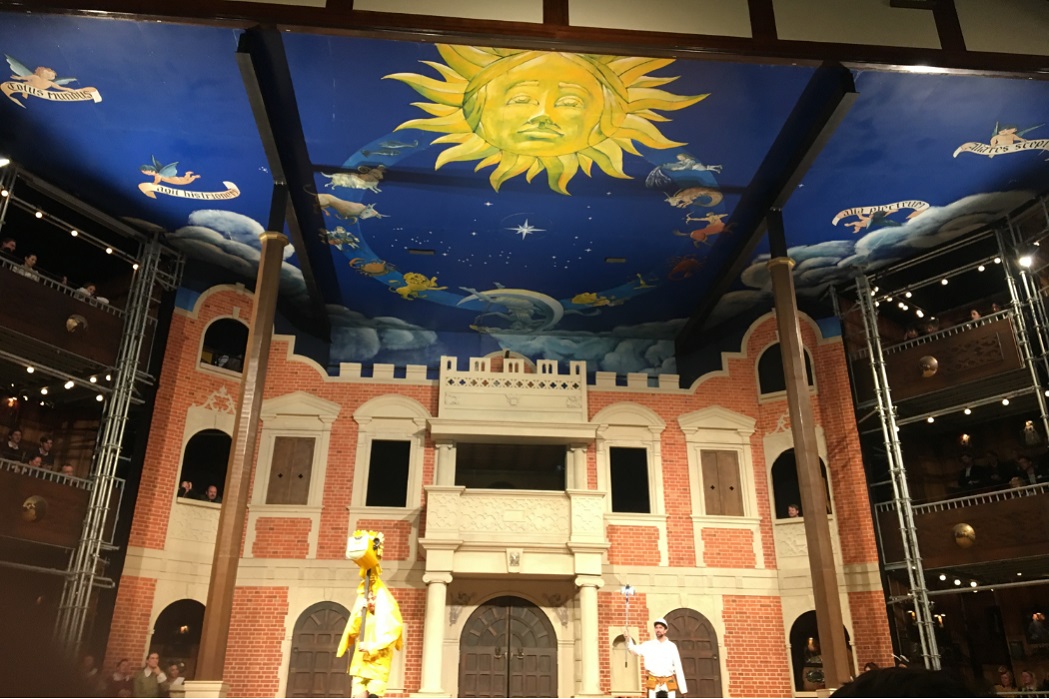 The cast and production came out in full force for the opening night of the pop up globe on Wednesday 5th, in Sydney’s Entertainment Quarter in Moore Park.

For those of you who don’t know the Pop-up Globe is the world’s first full-scale temporary working replica of the second Globe, the theatre Shakespeare and his company built where his original plays were shown.

When you first enter the pop up globe you are struck at how spectacular the structure is and how much work has gone into it. The room itself is very intimate with every seat being no more than 15 meters from the stage. The scenic design team have gone to great efforts to make the pop us globe resemble the original as much as possible with a hand painted brand new Jacobean inspired Frons Scaenae with two balconies and a stunning new ceiling of the Heavens.

I went to see A Midsummers Night Dream which was the opening play. Director Dr Miles Gregory has added his own twist on the play with some modern references Most notably the fairies that make their biggest impact on the show are played by Mauri tribal men and speak in traditional Mauri language. Whenever they enter the stage you are mesmerised by their voodoo powers and in particular the fairy queen Titania who was played wonderfully by Asalemo Tofete. Her first act scene with her black clad antler headed spirits was magical.

The old is blended with the new with some hip hop arrangements and audience interaction to shake things up. However there are still some traditional elements which add to the humour of the play all the female leads are played by men as they were in Shakespeare’s day.

There are three more Shakespeare masterpieces showing throughout the month of September The Merchant of Venice, The Comedy of Errors and for those who would prefer to see one of his tragedies Macbeth.

You are very lucky you get the opportunity to experience some fantastic acting in the performed in the space for which it was written so what are you waiting for!

Top Tip: If you don’t know the storyline I would suggest looking at a synopsis to follow what’s going on beforehand.

Written by Sernea Moran, Born and raised in in a small town in Ireland before moving to Dublin to pursue a career in advertising. Serena is an avid book worm, filmbuff and lover of all things things travel, design and dessert related. Seeks out adventure where ever she can find it and loves a good pina colada.

Euro Concepts Sydney has just launch an alcohol-free beverage that say is the closest yet to the real thing. The Wog with the Grog introduces…