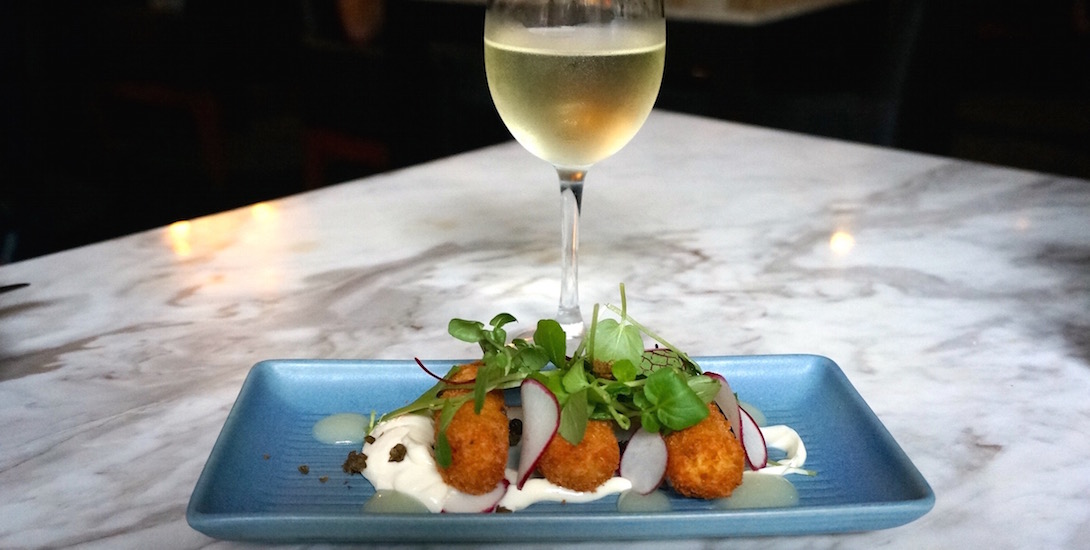 You know that feeling when you are planning a night out and can’t decide where do you want to eat?  Do you a) Order in? b) Wait hours in line to a restaurant and be left starving while still in the queue? or c) Actually have a decent feed at a place and not pay uber prices being in a hotel.

It’s an unlikely location for some people to visit a hotel restaurant unless it’s a special occasion, but the One Four Kitchen unites restaurant, bar and hotel with ease.

Tucked inside The Menzies Sydney Hotel and to the side of the lobby, One Four Kitchen is exactly what the CBD needs.  The produce is local, the focus is on the dish and the desserts are made in-house.  It doesn’t take much to lose yourself in this eclectic café-style restaurant with live music entertainment mid-week and the diners enjoying the atmosphere.

“Best croquettes ever tasted” the supervisor mentioned.  The salt cod croquettes with baby watercress, fried capers and thyme. Crisp on the outside, creamy on the inside, it’s no wonder these are a favourite.  A terrific match with the Verdejo wine, the plump salt cod and the modern mix of the lemon puree brings out this classic treat.

From the main, I chose the double lamb cutlet and the meat cooked on the bone was juicy and flavoursome.  The spinach puree, mint vierge and enoki mushroom complimented the lamb very well.  Although it was quite a green dish with the added peas, but the lamb shank dumpling is something you should finish off with.

Taking a break from all the food I’ve just eaten.  It was comforting to listen to the voice of Adam Harpaz, local upcoming talent with his acoustic guitar and piano playing skills.  It’s not often you see or hear music that is contemporary for a 4.5 star hotel but without being too conservative.  This street musician was a delight to hear, great to have a chat with and just adds to the restaurant.

Back to the food.

Desserts to me are a gesture rather than a highlight.  I had a taste of the banana mousse, with the dulce de leche (sweetened milk), salted chocolate and biscuit.  Delightful.  But what I originally opted for was the lemon and lime cheesecake with poached blueberries, almond crumble and basil.  When this arrived, it wasn’t what you would normally expect for a cheesecake.

Where’s the cake? This was just as tasty as a regular cheesecake but with far less fuss. There was no base to construct and no baking required.  A deconstructed dessert.

The taste was divine and seems a little lighter than a regular cheesecake, I’m thinking Greek yogurt instead of cream and a light cream cheese.  Visually it looked a bit busy on the plate, perhaps served in glass next time where you can really scoop into crumbs and poached blueberries. But can’t fault on the taste.

The evening concluded and I was pleased to see that there is a time for a fresh food hit and One Four Kitchen is the place to go.

Night Noodle Markets in the comfort of your dining table.

The Amalfi Coast comes to Sydney for summer by the pool at Uccello Restaurant, Merivale

Declutter your pantry and your fridge and restock

Last year, it was Employees Only Sydney's first bi

It's International Gin & Tonic Day and would love

How I wish to be travelling the Mediterranean Summ

It's back but indoors from the comfort of your din