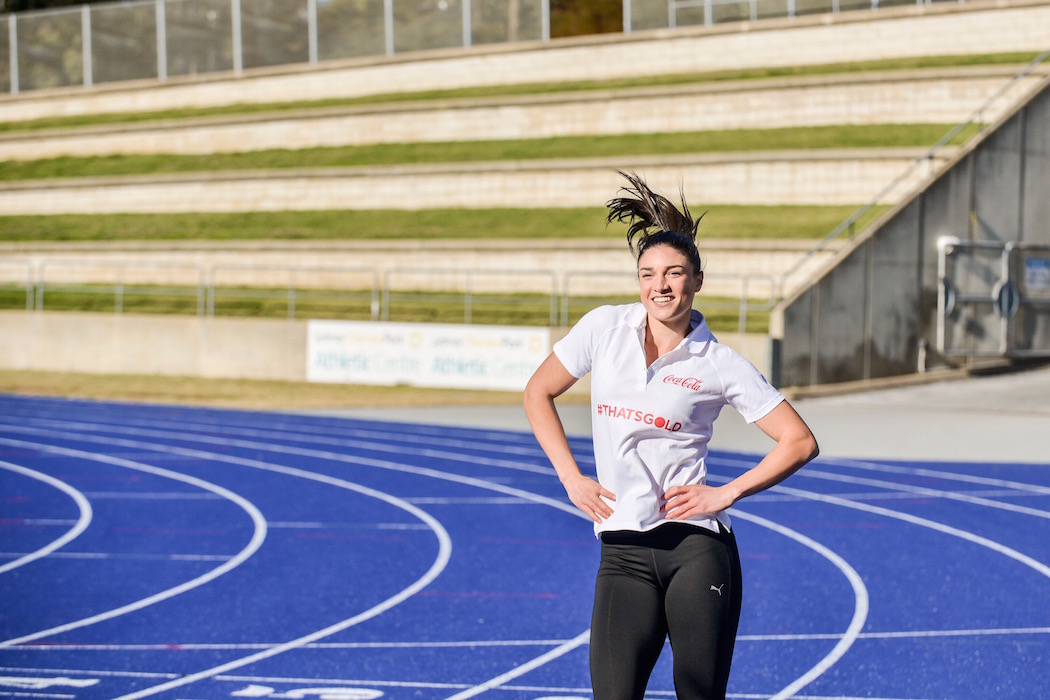 The Rio 2016 Olympic Games is here and to mark its more than 80 year partnership with the world’s greatest sporting event, Coca-Cola has announced Australian hurdling sensation Michelle Jenneke as ambassador for its new #ThatsGold Olympic Games campaign. #ThatsGold is aimed at inspiring the nation to come together and celebrate those everyday ‘gold’ moments that go beyond the podium, in support of the Australian Olympic Team as they prepare to create their own unforgettable experiences on the world sporting stage.

An ambassador for her well-known positive outlook and ability to bring her personality to professional sport. Michelle’s pre-race warm-up dance routine, first made famous in Barcelona in 2012, has been watched by millions around the world. Michelle will also feature in Coca-Cola’s global #ThatsGold campaign including a television campaign to be seen around the world.

As she gets ready to showcase her athletic talents in Rio, Michelle is encouraging Australians to share their very own #ThatsGold moments and, throw their support behind Australian athletes in their own search for gold. From simple family moments to celebrating with friends, Australians across the country all have ‘gold’ stories to tell that evoke strong emotions and connections, which Michelle and Coca-Cola are looking to promote.

Michelle is thrilled to be involved with the campaign, saying: “It’s so exciting to be part of a campaign that has a goal of inspiring the whole country to get behind the Australian Olympic Team, celebrating those moments that just make you say ‘That’s Gold’! The message behind the campaign really resonates with me and I can’t wait to see all those special moments people share around the country. Knowing the public are behind us will give the Australian team an extra boost in Rio!”

We got to know Michelle on a personal tone.
“When I compete for Australia I always have an Aussie-themed outfit that I wear,” she said. “It includes green and gold ribbons in my hair, an Australian flag tattoo on my hip, odd socks (one yellow, one green) and also my nails painted green and gold – just to bring that patriotic vibe.”

On being dubbed Jiggling Jenneke, Michelle said:  “I think it’s a pretty cool title, to be honest,” she laughed. “In athletics it can be difficult to get that sort of exposure and it’s been really great for me, the fact that this video has gone out to the whole world. It’s opened up so many doors for me and I’m so grateful for that.”

Growing up Michelle was always a realist and never thought she would be in a position where she would be capable of going to the Olympic Games. It’s only been in the last two years or so Michelle decided this was a realistic goal to achieve. At the age of 16yrs, Michelle qualified for the Youth Olympic Games and competed at 17yrs. Top 3 Golden Moments
Winning Silver at the Youth Olympic Games 2010
I came second in the final and walked away with a silver medal. That was a really huge moment for me and that’s the moment when I realised that I was half decent at athletics, so that was definitely a golden moment for me.

Running a Personal Best
In 2015 at the National Championships where I ran my personal best time of 12.82 seconds, and in that race I actually became the second fastest Australian of all time – behind Sally Pearson, who’s pretty fast, so being second behind her was a really great moment.

Feeling the Love
At just about every race, my family is there supporting me. They travel all over the world to watch me compete and I’ve got eight people coming over to Rio just to be part of my cheer squad. They’re so amazing. After every race I always find my way into the stands, even if it means breaking through some areas I’m not meant to be in just to make sure I find them – then it’s hugs all round! It’s a really special moment

Fans are asked to show their support to athletes in Rio by posting a picture or video of their #ThatsGold moment on social media, along with the hashtag and a short explanation of why this moment is ‘gold’.

The Australian Fashion Council (AFC) partnered with Lustr to launch a voting campaign that brings our emerging curated labels to your fingertips. Labels include;…