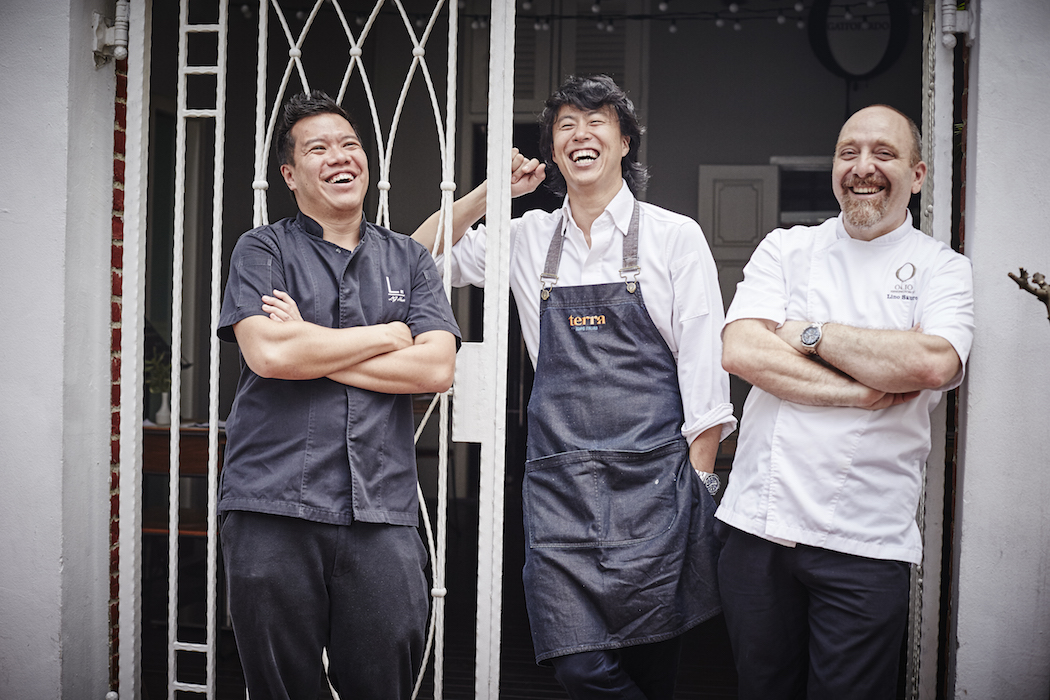 The Private Kitchen in Chippendale’s burgeoning Kensington Street precinct has secured the ultimate coup by way of two Michelin-starred chefs for the launch of a series of dining events, the Four Hands International Chef Collaboration.

The ‘Four Hands’ experience pairs Kensington Street’s resident chefs with a succession of acclaimed visiting chefs including Chef Han Liguang who was last week awarded his first Michelin star for his restaurant Labryinth in Singapore and Chef Seita Nakahara from the celebrated terra, also in Singapore.

Owned by Greencliff, The Private Kitchen was always destined as a platform to promote international chefs to Sydney diners. Located on the third floor of The Old Rum Store, a distinguished heritage building that recently roared to life with the addition of Olio Kensington Street and Eastside Grill, The Private Kitchen has until now, been reserved for private events. The ‘Four Hands’ series will therefore provide an unique opportunity to dine in one of Kensington Street’s hidden gems.

Greencliff Executive Chairman Dr. Stanley Quek said, “Kensington Street is already the second home to a number of international chefs including Stanley Wong from Eastside Grill, Lino Sauro at Olio Kensington Street and Frederic Colin from Bistrot Gavroche, whom each have established restaurants and culinary businesses outside of Australia.

The Private Kitchen was designed to be a space that would shine a light on visiting chefs, whether from overseas or interstate. It’s a fantastic opportunity for chefs to get an insight into the Sydney dining market and for guests to have a dining experience they would otherwise have to travel to enjoy.

The first event will be held next week with only a few tickets remaining:

Chef Seita Nakahara from terra, which has previously been awarded a Michelin star, will join forces with another of Singapore’s finest chefs and Olio Kensington Street’s own chef Lino Sauro, for a night of indulgence at The Private Kitchen. The six-course menu will reflect their shared passion for exceptional produce and Italian influenced cuisine and showcase two star chefs at their best.

Hailing from Tokyo, Chef Seita spent his formative years in Singapore where he developed a lifelong zeal for Italian cuisine. It’s this passion he shares with chef Lino, himself an award-winning chef and the mastermind behind Gattopardo in Singapore. Together, they’ve created a menu that unites their respective food philosophies into one memorable dining experience.

Chef Lino is joined by chef Han Liguang from Labyrinth in Singapore to present a dinner that marries the cuisine of two very different chefs. In one corner will be chef Han with his Neo-Singapore cuisine, a style that represents familiar Singapore flavours and delivers dishes in a novel and unexpected form through the use of food science and modern technology. In the other, resident Kensington Street chef Lino, the master of nuova Sicilian cuisine. Both pay homage to the tradition of their respective cuisines but are united in their modern interpretations and have collaborated to deliver a six-course menu that will sling you between Singapore and Italy in a matter of mouthfuls.

As well as these ticketed events, Chefs Seita and Han will also host two private events each during their time in Sydney.