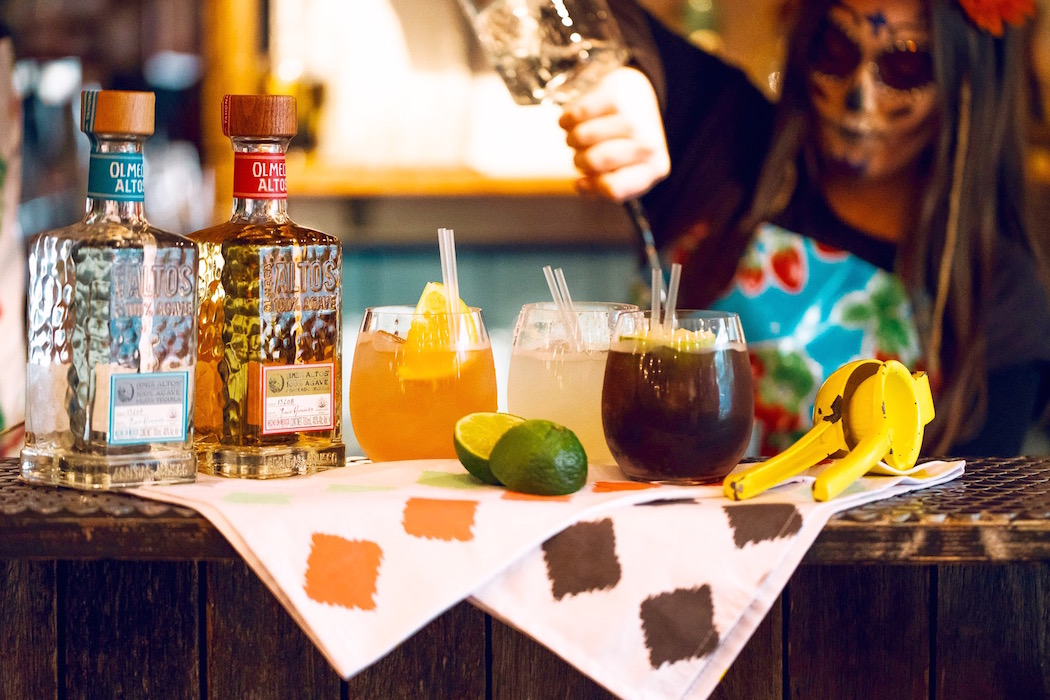 Going loco for El Loco in Surry Hills. Last week I found myself in a place with colourful streamers hanging from the ceiling and posters featuring Frida Kahlo, sombreros wearing sugar skulls with moustaches, and even a Mexican wrestler probably named El Lucho, and I knew I was in for a good time.

And that’s exactly what I got at this Mexican cantina, where cheeky Margaritas and gloriously messy tacos were skilfully combined.

Now I did it mention it was a Margarita cocktail masterclass and I’m no stranger to the classic cocktail. But what really goes into the cocktail, it seems easy enough to mix – everyone can make it, but do they use quality tequila? Don’t even get me started, drop the pre-mixed margarita drinks, as for the frozen not shaken deal – that’s just a preference.

The masterclass was headed by Ben Davidson, ambassador for Olmeca Altos Tequila, who told us a bit of its history and process to making a smooth, 100% Blue Agave Tequila. From the evening, we learnt that the tequilas were exclusively produced in the heart of Los Altos, 2104 meters above sea level in the western state of Jalisco in Mexico.

With two tequilas on the grab, the Altos Reposado has a sweet fresh citrus type aroma and you can taste the Agave and woody vanilla flavours. Aged for about 6-8 months in a white American oak ex-bourbon cask.

Pause for dramatic effect – definitely packs a punch (facial expressions, you had to be there)

Sipping tequila in the masterclass was a little different, as normal people would have taken the shot with lime and bang the table. Lucky for me, we had a pretty cool group on our table. The delightful Bobbie from SydneySocial101 and Silke from Happiness and Things.

What was surprising to me, was that this tequila are exclusive to to the Merivale Group here in Sydney. One more reason to visit the other venues to try out their food and classic mixes.

The tequila I most enjoyed was the Altos Reposado, basically the main difference is that this is not a white spirit and doesn’t taste alike rocket fuel. It was smooth to drink.

The original Margarita cocktail was first mentioned in print in Esquire magazine in 1953. It is described as “lovely to look at, exciting and provocative”. The recipe is somewhat casually described as an ounce of tequila with a dash of triple sec and the juice of half a lemon or lime.

Ben did mentioned some plausible theories of whom invented the drink, but still remains a mystery. I did like two of the stories. One was Margaret Sames, an American socialite who through lavish parties in Acapulco – claims to invented it in 1948. The other was Tequila Daisy – as Margarita is Mexican for Daisy – a very popular cocktail in the 1930’s. A Daisy cocktail is any spirit shaken with triple sec and lime juice. The recipe for a Tequila Daisy would be the same as a Margarita.

If you are heading out in the city, drop by a local cantina where authentic recipes are free to mingle with delisiosos fresh ingredients. Kick back and celebrate with your amigos and amigas with incredible Altos tequila based Margaritas and tempting tacos.

Altos Paloma
“The most popular tequila drink in Mexico. What the locals drink”.
45ml Altos Reposado
30ml pink grapefruit juice
60ml lemonade
Add ingredients to a tall glass and fill with ice. Stir and garnish with a slice of grapefruit.

Altos Batanga
“Invented at La Capilla bar in the town of Tequila. Stirred with a knife”.
45ml Altos Plata
Juice of half a lime
90ml cola
sea salt rim
Add ingredients to a tall glass and fill with ice. Stir and garnish with a lime wedge.