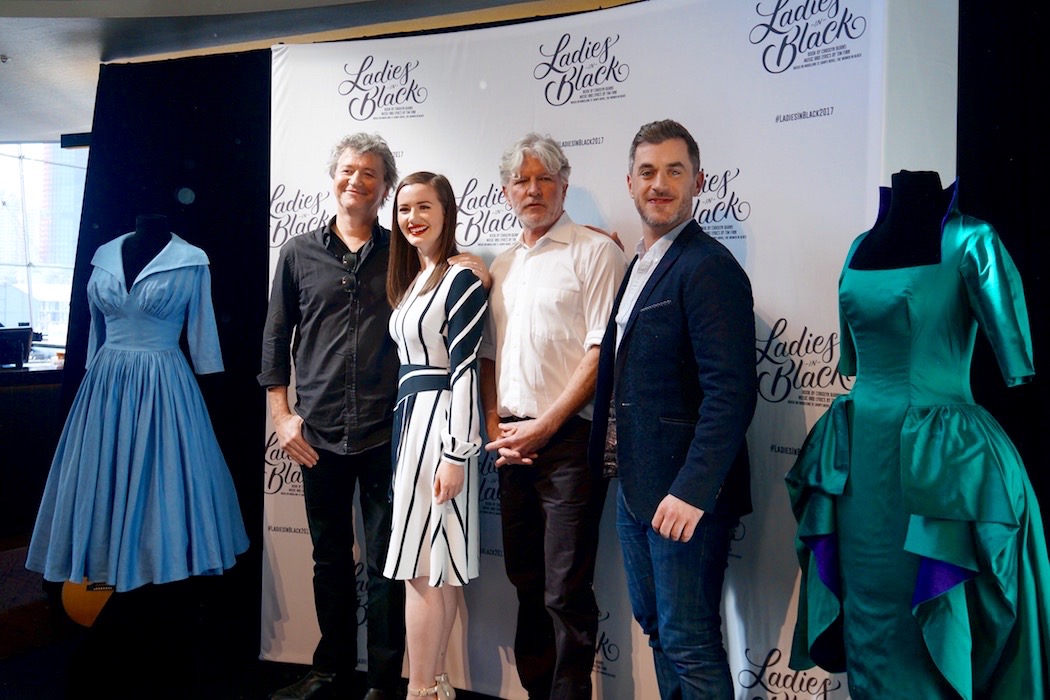 From the adaptation of Madeleine St John’s 1993 novel, The Women in Black, this acclaimed production, through the Queensland Theatre Company has announced the tour to go nationally in early 2017. Opening in Sydney on January 3 for its premiere season in the city in which the story is based. The show will then return for an encore season to Brisbane from January 28, before another encore season in Melbourne from February 25, and to Canberra from March 27.

The world premiere of Ladies in Black, the stylish story of fashion, friendship and 1950s Australia took place in Brisbane in November 2015 with the frock-fest signalling a stunning and triumphant return of musical theatre for the company. Last month Ladies in Black won the coveted Helpmann Award for Best New Australian Work and was nominated for another five awards.

The show features over 20 original songs written by Tim Finn and a stunning range of some 30 custom-designed and created dresses and suits. The genesis of Ladies in Black actually happened at the Brisbane Airport – Tim Finn was famously looking for a book to read, bought The Women in Black and on reading it, was compelled to call Simon Phillips and plant the seed for a stage production. On the plane, he started writing the music. The rest is history.

Revisiting the role of Lisa, the young starry eyed school-leaver is Queensland-born rising star, Sarah Morrison. Sarah studied Opera at the Queensland Conservatorium after high school, and then moved to Victoria to follow her first love in musical theatre. In this her first pivotal role, she has won acclaim and ovation.

The brilliant Bobby Fox, who wowed audiences playing Frankie Valli in the smash hit, Jersey Boys, returns as Rudi (otherwise known as the ‘Continental’) along with the multi-talented and award-winning artist Carita Farrer Spencer who will play Mrs Miles, and fellow Queensland graduate and music and stage star Kathryn McIntyre who will play Myra. Accomplished Melbourne-based actor Greg Stone (Once, The Weir, The Glitch) takes on the dual roles again as Mr Miles and Stefan, and joining him from the southern state Kate Cole (Sweet Charity, Grounded) again takes to the stage as the characters Miss Cartwright and Joy.

New to the cast for the Australian tour is the leading lady of stage and screen Natalie Gamsu (Strictly Ballroom, Mary Poppins, Dr Zhivago, Neighbours) who will play the character of Magda, as well as Sydney-based Madeleine Jones who was nominated for a Helpmann Award in 2015 for her work in Once. She will play Patty.

Taking the role of Fay is leading singer and stage performer, Ellen Simpson, who was most recently seen as Renee Geyer on television screens in the blockbuster tele series, Molly.

QTC Artistic Director Sam Strong said the national tour of Ladies in Black was the perfect reflection of Queensland Theatre Company and its commitment to create nationally acclaimed theatre.

“I’m thrilled to be launching the national tour of Ladies in Black. At QTC we couldn’t be more proud of this joyous new Australian musical. In its first life, this beautiful show charmed audiences in Brisbane and Melbourne. We’re delighted to be bringing it back to those cities where audiences couldn’t get enough. We’re also delighted to take the show to new cities, including Sydney where it is set, so it can weave its spell on thousands of new people”

Tim Finn sang a number he wrote for Rudi, the 40 year old Hungarian woman who runs the model gowns section of a Sydney department in the late 1950s. What was funny, during his days with Split Enz and Crowded house, it wanted to find something that rhymed with Yves St Laurent… let’s try “elegant” (in a French accent) and he was happy. Then he read to his horror YSL was not interested in elegance at all. The answer was seduisant – a French world for seductive.

With a dash of delicate comedy, Ladies in Black is a magical modern-day fairytale set in a stylish department store – F.G. Goode – in a city on the cusp of becoming cosmopolitan: Sydney is crossing the threshold between the stuffy repression of the 1950s and the glorious liberation of the 1960s. Donning a distinguished black dress, the bright-eyed, bookish school leaver Lisa is about to join the ranks on the sales floor of the city’s most prestigious department store – temporarily, of course.

In what’s tipped to be the biggest Sydney Autumn Carnival yet, the city’s hottest gourmet trackside precinct, Little Sydney, is returning to Royal Randwick…