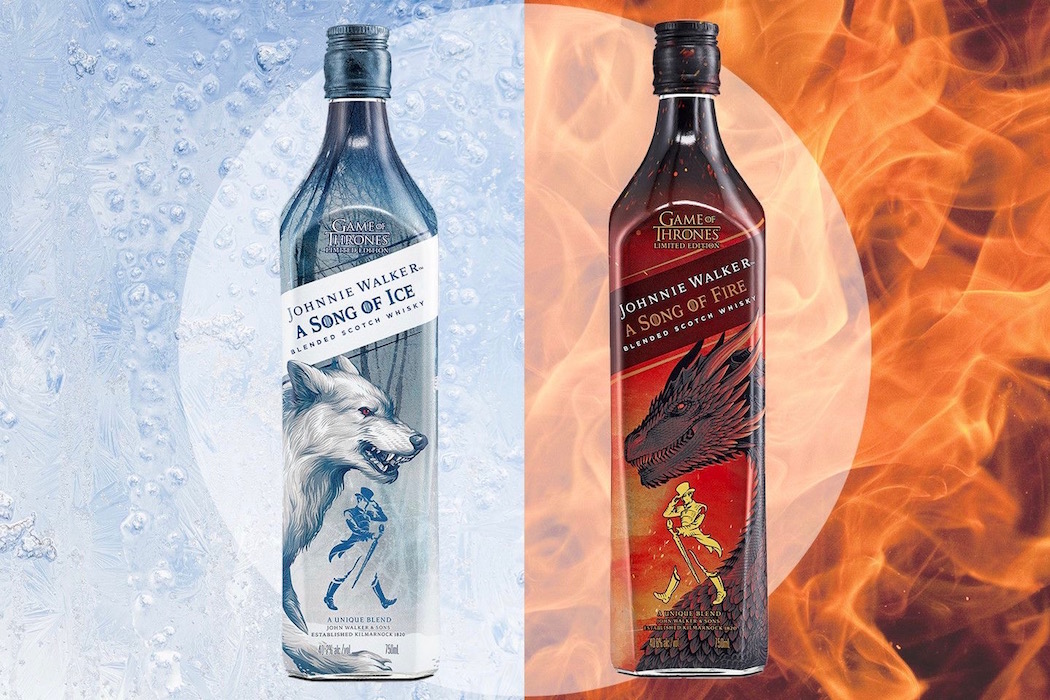 Declare your allegiance, Stark or Targaryen, Direwolf or Dragon. Whether it’s fire you desire or you have ice in your veins, Johnnie Walker has a Game of Thrones whisky for you.

When the bottles are paired side-by-side, on the A Song of Fire bottle, Johnnie Walker’s iconic Striding Man uncharacteristically faces head-to-head with the A Song of Ice Striding Man, both backed by the fangs of the Direwolf and the smouldering breath of the Dragon. As a pair, the bottles convey the dynamic relationship between House Targaryen and House Stark by displaying their house symbols – the Direwolf and the Dragon – side-by-side.

Johnnie Walker A Song of Ice has a crisp, clean taste inspired by the unforgiving, sharp Winterfell terrain and the freezing ice that shapes its mountains and stops its rivers.

Much like Winterfell’s positioning in Westeros, A Song of Ice is crafted using whiskies from Clynelish, one of Scotland’s most northern and iconic distilleries, lending a fresher crisp to the Scotch. The whisky’s delicate flavour is grassy, with notes of vanilla and tropical fruit akin to the fruit from the orchards of Dorne.

The sweeping blues and greys of the bottle design evoke the freezing North of the show – famed for its harsh winters and arctic frozen landscapes. Johnnie Walker A Song of Ice is best enjoyed on the rocks – the whisky delivers a cold, smooth finish.

Johnnie Walker A Song of Fire boasts flavours of subtle smoke from the peated malts of the Caol Ila distillery. Synonymous with the House in which it hails from A Song of Fire’s full-bodied flavour delivers subtle red fruit, a sweet smoke and a hint of spice like those laden in the markets of Meereen.

The bottle design evokes a fiery setting with the deep-red colours inspired by the dragons of House Targaryen, feared for their fire breathing. A Song of Fire is best enjoyed neat, lending a warm, smooth finish.

These limited edition whiskies are a continuation of the Johnnie Walker collaboration with HBO critically-acclaimed series Game of Thrones and successor to the limited-edition Scotch White Walker by Johnnie Walker, which was launched in 2018.

Johnnie Walker A Song of Ice and A Song of Fire will both be available at liquor stores nationwide from $69.99 for 700ml.

You had me at Pizza, The Garden West launch

It may have been the morning after the Sydney Gay and Lesbian Mardi Gras, but that didn’t stop me from heading out west. It…