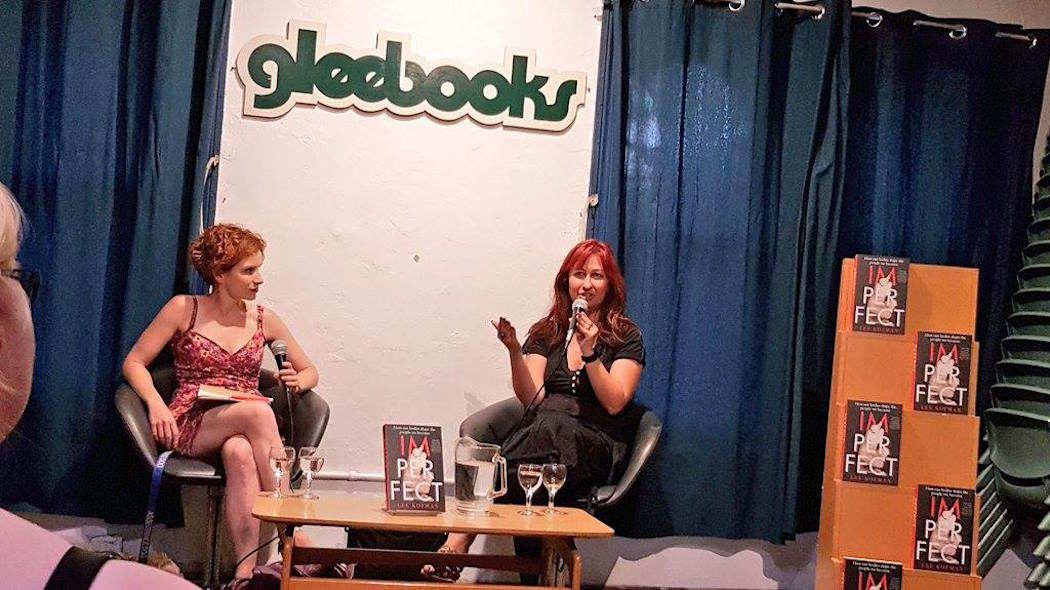 Lee Kofman just published her new book “Imperfect” and I went to her Sydney book launch, which was in the style of a discussion. The author Fiona Wright acted as the host, asking Lee questions about the book and her own experiences with the subject. “Imperfect” is setting out to uncover, “how our bodies shape the people we become” and is not just about Lee’s own experience of having scars and so having a “non-normative” body but also about other people’s experiences of having bodies that deviate from the current norms around appearances.

This is mainly why I went to the book launch. A year ago, or so, I was interviewed by Lee for this book due to my Albinism. Albinism is a genetic disorder, which amongst other things, impacts the appearance of those affected. Due to a lack of pigmentation, the skin, hair and eyes of people with Albinism are extremely fair. Lee’s three-year-old son was born with Albinism himself and that of course made Lee even more interested in the subject.

Lee herself has extensive scarring and dives deep into the subject of the contemporary pressures around beauty and how these affect people’s lives, particularly when their bodies are “different”. In the book she coins the phrase body surface, to describe physical appearance that can’t be changed. Scarring, albinism, dwarfism etc. can’t be changed or made more attractive with a new haircut or a change of clothing, it’s something people like us have to live with every day.

At the launch Kofman talked about her time growing up in the Soviet Union before moving to Israel and later migrating to Australia. With this change of location came also a cultural change of how her scars were viewed by the public. In Russia she was able to show her scars publicly, gaining sympathy and starting conversations. However, when moving to more Westernized countries such as Israel and Australia, she quickly learned to cover up, because people reacted negatively and ostracized her for her scars.

Spontaneously, I was asked up on stage myself to answer the question of how the way I look impacted my life. I talked about the positive effect, that people always recognize me and remember me, which was advantageous at university, for example. I also talked about a lot of negative male attention I received since I was a teenager, because being unusually blond, fair skinned and blue eyed seems to be a beauty ideal for many nationalities. That negative attention very often consisted of just being touched or grabbed by men without permission and caused me to be hyper vigilant and very careful with men.

Fiona Wright, who had her own experience of not looking perfect because of her anorexia, and Lee too, also noted how they became hyper vigilant because of their differences. Fetishization is a common problem for people with physical differences.

“Imperfect” will be a good read for anyone, who wants to dive into the topic of physical perfection and imperfection in the way of a mix of a memoir and a cultural critique.

Take the plunge at PARKROYAL Melbourne Airport’s Swim and Lounge Package for only $15, offering more than your standard airport lounge with access to…