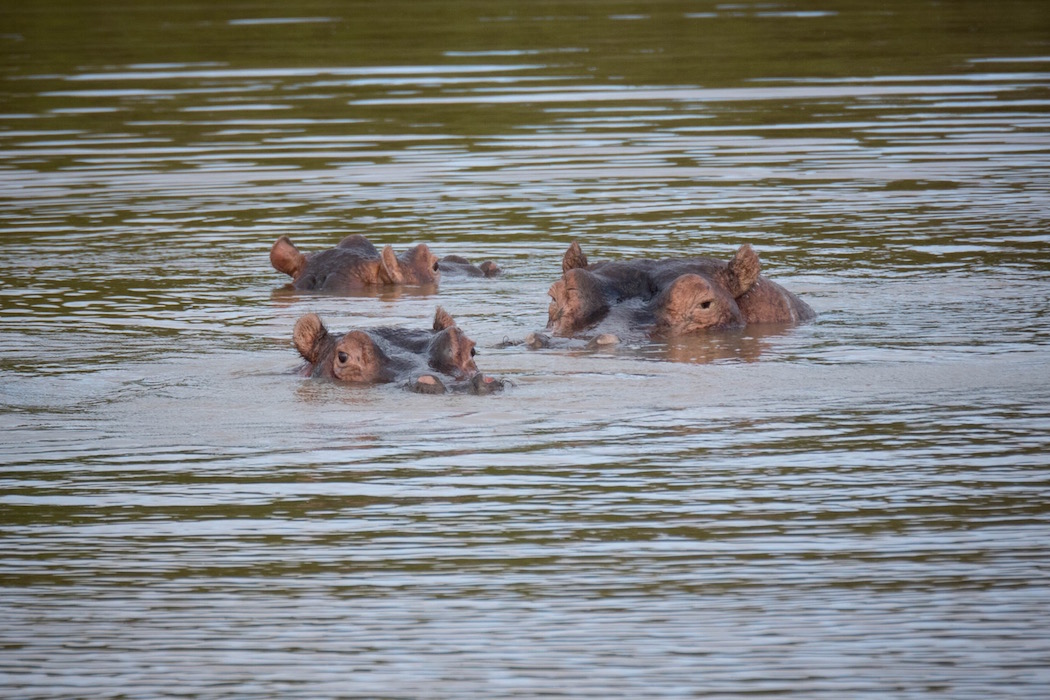 Did you know that today is World Hippo Day?

When I think of hippos, I tend to think of chubby, lazy sea creatures lounging in the waters. They weigh up to three tons and that they reside in Africa, but there is more to them that meets the eye. Here are some lesser known facts about hippos that could surprise you. And we are not talking about the Disney’s fantasia dancing pink tutu kind of hippos.

* The name hippopotamus means ‘river horse’ and is often shortened to hippo.
* Generally considered the third largest land mammal (after the White rhinoceros and elephant).
* The closest relations of the hippopotamus are surprisingly cetaceans such as whales and dolphins.
* Although they look cute, they are regarded as one of the most dangerous animals in Africa.
* At birth, the baby, called a calf, is a whopping 50 to 110 lbs. (23 to 50 kg).
* There are only two species in Africa.
* The cannot sweat – so that endless sunbaking.
* The love the water by day and are land animals during the night. Kora National Reserve
The Kora National Park was made a wildlife reserve back in 1973, and as a wildlife park in 1990. It covers an area of just over 1,700sq km. This triangle of dense woodland and scrub spreads along the Tana River, which rises in the highlands between Aberdares and Mount Kenya before descending towards the Indian Ocean. The pristine wilderness of the Tana River is complemented by the stunning Adamson’s Falls and Grand Falls, creating diverse scenery for visitors. The park is home to a large hippo population as well as big cats and several antelope species. The Kora National Reserve is an all year round destination, so no matter when you visit you’re guaranteed to see these amazing animals.

Mwea National Reserve
Located 160km north-east of Nairobi, the Mwea National Reserve is in the Mbeere District, Eastern Provence. Visitors to the reserve can enjoy boat rides at the Kamdaru Dam and Hippo Point, as well as a walking trail. As the name suggests, Hippo Point is one of the best places to see hippos in their native habitat. The reserve is home to over 200 species of rare birds, elephants, giraffes, zebras, and buffalos, to name but a few.

The Tsavo East and Tsavo West National Parks
The Tsavo National park is divided into two parks separated by the Mombasa Nairobi highway. Both parks are located in the coastal region and this is the largest park in the country covering about 22,000 square kilometers. Of the 2 parks, Tsavo East National park is slightly larger than Tsavo West. Tsavo East is characterised by a flat terrain while the West is more mountainous and green. Tsavo West also has a number of swamps, rivers and springs. The Mzima Spring is located in Tsavo West and guests get the chance to watch hippos from under water at this location.

Bisandi National Reserve
Bisandi National Reserve acts as a wildlife dispersal area for Meru National Park. It is home to three permeant rivers that give the diverse wildlife a better habitat all year round, attracting a large population of hippos to this part of Kenya. Due to its untouched nature, visitors have the option to either camp or stay at the Offbeat Camp – this reserve is all about the natural surroundings. Whilst the hippos are the main attraction, this reserve is also home to over 400 species of birds.

Have you been to Kenya and spotted a hippo in the wild? Tell me your story.

Living your best life and now in credit card debt?

What does one do when you are living your best life and somehow accumulates a massive credit card debt? With one in six Aussies…