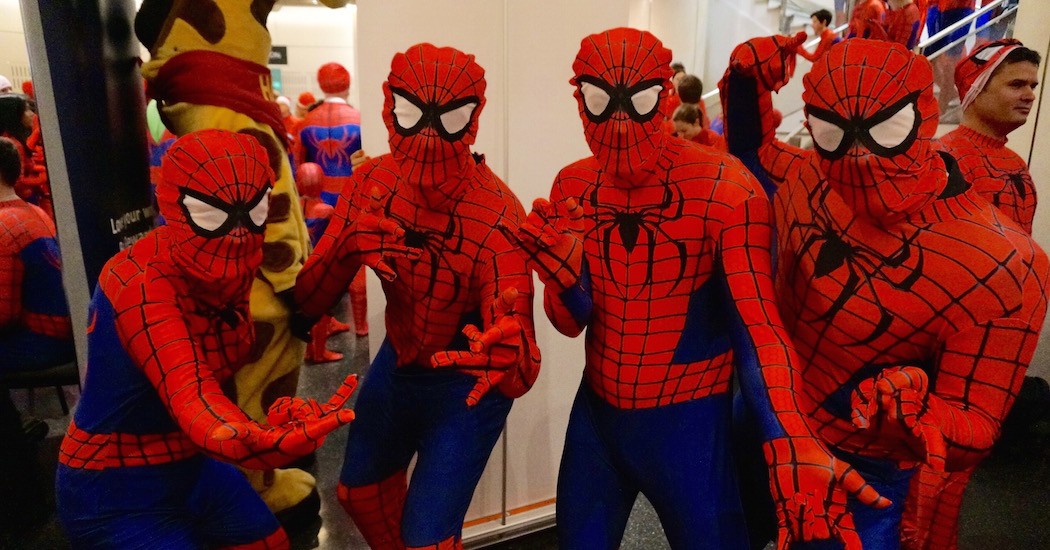 Charterhouse, a Sydney recruitment agency came up with a plan to raise money for a charity, Life Education. The idea was to break the previous Guinness World Record of the number of people dressed up as Spiderman. 398 was the record to beat.

Life Education, the chosen charity are the largest independent Australian, health and drug education provider for school children aged 5-13 years. Perhaps most easily recognised by their mascot Healthy Harold the Giraffe, this wonderful charity has been visiting schools across Australia for over 35 years. Their work aims to empower children and young people to make safer and healthier choices through education.

I received an email from a colleague at work letting me know this was happening right here in Sydney and would be fun to go. Even better still, can you imagine not only arriving wearing a full-blown Lycra Spiderman outfit, but coming out as a record holder. It beats training for the Olympics.

If I was going to go down in history, I needed to recruit a couple of outgoing friends who don’t mind getting dressed up.

The attempt, took place in the early hours at Sydney’s City Recital Hall, Tuesday 28 July 2015. It was a free event and everyone just needed to register on the website and donate online for the cause.   They even supplied the costumes so that we all complied with the world record rules.

It was a like a Marvel Comics convention and Spiderman was the only act on stage.

We slipped on our costume and our spidey-sense indicated we are soo going to smash the record. Just by the sheer number of people in the auditorium.

Guinness World Records officials were carefully counting each person entering. We were given the all clear and had to sit fully clothes, masks down for five minutes.

To keep our spirits high, we did a couple of spidey-exercises. Spidey-jumps, spider-web poses and even a spidey-mexican wave.

We all made it! We broke the record that was previously recorded at 398 by Escapade Fancy Dress (UK) at Student Central in London, UK back in October 2014.

Yep, I can now add World Record Holder to my CV!

What do you do when you have two nights at Nimbo Fork Lodge? There are different options available when travelling from Sydney to Killmicat….