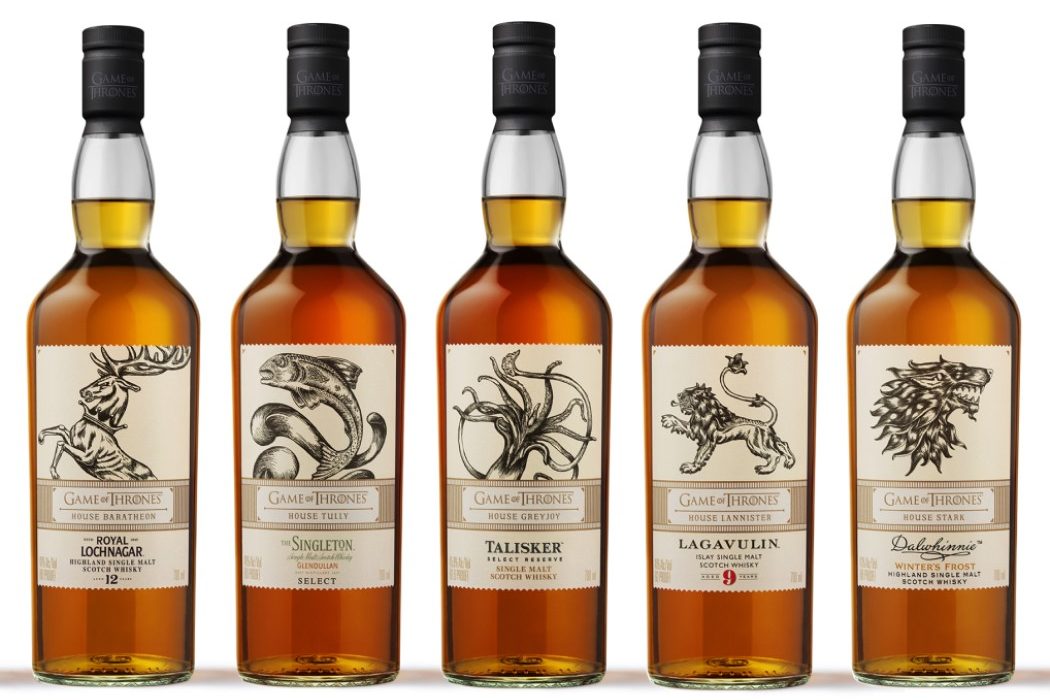 To celebrate the eighth and final season of the critically-acclaimed TV series, Game of Thrones, DIAGEO and HBO have released a limited-edition collection of Single Malt Scotch Whiskies. The collection features seven Scotch whiskies paired with six of the iconic Houses of Westeros, as well as the Night’s Watch, giving fans an authentic taste of the Seven Kingdoms.

Diageo’s unparalleled diverse range of distilleries in Scotland, much like in Westeros, each have their own unique characteristics and produce a distinctive whisky representative of its local terroir. These similarities were the inspiration behind the collection, drawing an authentic storyline between each House and single malt pairing. Whether you want to collect them all or represent your chosen House, be sure to pick up a bottle before they leave the realm.

“We’re excited that the Game of Thrones Single Malt Scotch Whisky Collection will be hitting shelves in more countries around the world. We are always trying to find fun and interesting ways to introduce our Scotch portfolio and what better way than partnering with Game of Thrones, one of the most successful TV series ever created. We are thrilled to be celebrating the final season of the show by toasting with whiskies that authentically pay homage to some of the greatest characters and houses,” said Pedro Mendonca, Global Reserve Marketing & Malts Director.

“Game of Thrones is one of the most popular TV shows around the globe, so we’re thrilled to be able to give fans in so many countries the chance to celebrate the final season with these fantastic whiskies. Whether they’re choosing allegiance to a House or collecting the whole range, there’s a wonderful diversity of the utmost quality thanks to Diageo’s unparalleled Scotch distilleries” said Jeff Peters, Vice President, Licensing & Retail at HBO.

Meanwhile, royal lineage drives the iconic pairing for Game of Thrones House Baratheon – Royal Lochnagar 12 Year Old. Similar to Robert Baratheon ruling the Seven Kingdoms upon the Iron Throne, Royal Lochnagar was deemed a whisky worthy of a royal family as it was granted a Royal Warrant after Queen Victoria and Prince Albert visited the distillery in 1848.

Be sure to have one of the unparalleled Game of Thrones single malt whiskies on hand to toast to the final season. Collect all seven whiskies while supplies last and be sure to celebrate the final season responsibly.

Available to purchase from liquor stores nationwide from the end of March.

Mr Black invites all serious coffee connoisseurs to have their senses awakened at the coffee-only pop-up bar, Grindhouse. Popping up at the renowned Three…