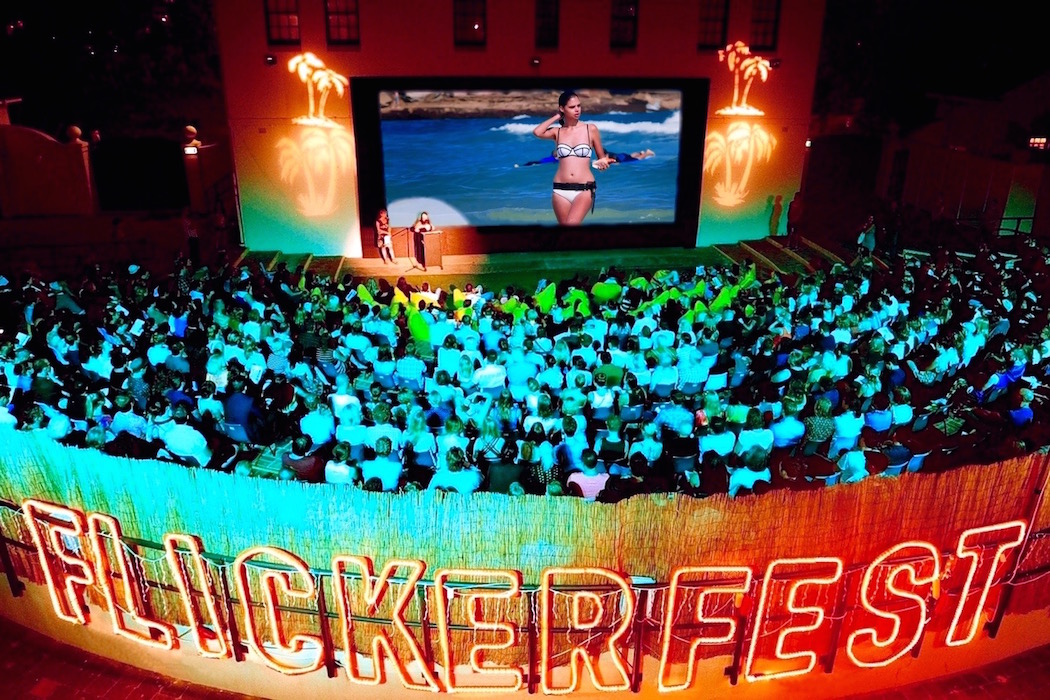 The 26th annual Flickerfest Short Film Festival launched at Bondi Pavilion at Bondi Beach last night and is set to screen for the next 10 days before setting off on a national tour of 50 venues until May.

It has been said that more than 2500 entries from around the world and 122 were chosen for selection. Of these, 60 shorts will compete for the “Academy® Accredited Award for Best Australian Short Film”.

The Australian competition alone includes 22 world premieres, nine Australian premieres and 19 NSW premieres which will debut at the Bondi Pavilion season from January 6 to 15.

The summer film festival had celebrities, industry VIPs and film aficionados alike and I was one of the lucky few to walk down the red carpet to enjoy a great night of entertainment, including world premier of the official Flickerfest trailer. Festival director, Bronwyn Kidd, continues to be the driving force behind Flickerfest and spoke to the crowd about the sensational year to come.

The trailer featured an all indigenous cast and crew with a Wizard Of Oz theme descending on Bondi Beach. Directed and written by award-winning indigenous director Dena Curtis, the trailer stars delightful Miranda Tapsell as Dorothy, Christine Anu as the Good Witch and Jeremy Ambrum as the Lion, Bjorn Stewart as the Tinman, Meyne Wyatt as the Lion & Alexis Lane as Wicked Witch.

OS Love
A young woman dives into the absurd realm of screensavers and desktop backgrounds until merging with the uncanny operating system named “OS Love”, a clever comedy produced.

Messiah
In a playful collision of cultures, a hapless Irishman and his Parisian girlfriend get more than they bargained for when they encounter a particularly mischievous stranger in the spectacular Australian wilderness. My favourite

Trespass
A woman walking her dog alone in the bush has a strange encounter with a little girl. It reminded me of an Australian thriller movie, Wolf Creek, where you know something is not right and its about to happen.

Fish With Legs
A school of fish wakes to discover that everyone has grown legs. An animated comedic short film, have the grown legs due to science or an act of God from above the water.

Timecode
Luna and Diego are the parking lot security guards. Diego does the night shift, and Luna works by day. Not one with words, but it’s all about communicating through the video recording seen. My favourite.

For tickets book online via moshtix or at the box office, Ticket & Festival Info

Have you ever flown across the ocean for more than eight hours on a flight? It is exhausting no matter where the destination is,…