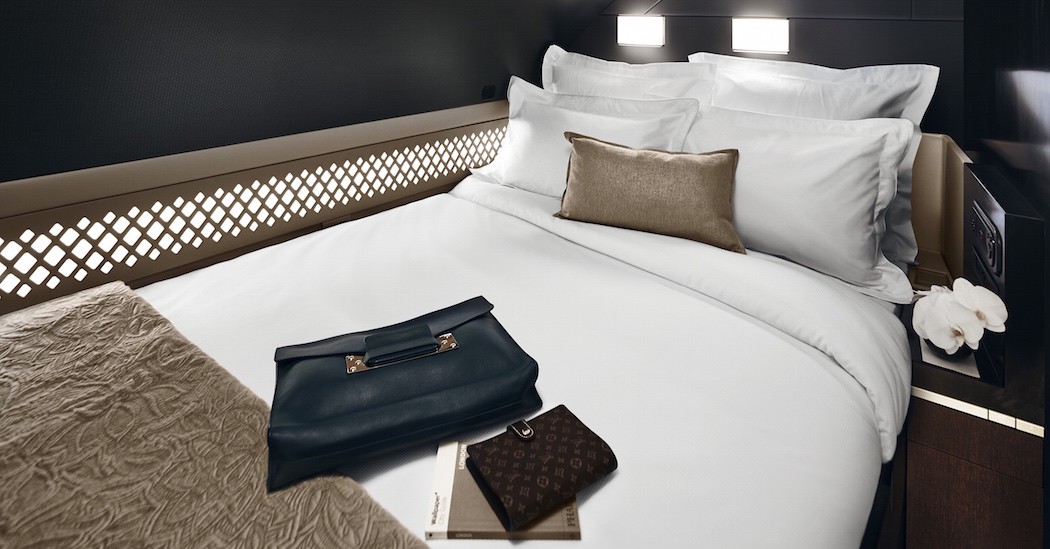 This year’s winners of the globe’s most prestigious prize for aircraft cabins received their trophies on Tuesday 14 April. The thrill of winning the Crystal Cabin Award 2015 was shared by Etihad Airways.

Etihad Airways has scooped the coveted 2015 Crystal Cabin Award in the ‘Premium Class & VIP’ category, for its innovative Airbus A380 upper deck cabin designs and products. The ceremony was held in Hamburg, Germany, as part of the annual Aircraft Interiors Expo.

The Crystal Cabin Award is the only international award recognising excellence in aircraft interior innovation.

“This prestigious accolade is testament to the incredible work carried out by the Etihad Airways team and the members of the Etihad Design Consortium. It has brought to reality our vision of redefining travel by investing in innovation and attention to detail, allowing us to totally reimagine flying”. Quoted by Peter Baumgartner, Chief Commercial Officer of Etihad Airways.

The award was presented jointly to Etihad Airways and the members of the Etihad Design Consortium (EDC) – a unique grouping of three leading brand and design agencies, who pooled their combined skills to deliver Etihad Airways’ ambition of revolutionising air travel by totally reimagining the flying experience.

Created in 2008, in collaboration with leading co-creation and research agency, Promise Communispace, the EDC incorporates three companies: Acumen Design Associates, who were contracted to design all on-board seating; Factorydesign, who were chosen to design the guest experience and destination zones; and Honour Branding, who were tasked with coordinating the project interface between the EDC and Etihad Airways and formulating the creative strategy for the concept work.

As part of this objective, Etihad Airways sought to rethink the upper deck design on its 10 new Airbus A380 aircraft, the first of which is currently in service between Abu Dhabi and London Heathrow, with Sydney and New York seeing A380 services from June and December 2015 respectively.

The Upper Deck of the Etihad Airways A380s includes three distinct passenger experiences, as well as a luxurious lobby area; The Residence by Etihad, the world’s first private three room cabin on a commercial aircraft, featuring a living room, bedroom and bathroom; First Apartments in First Class, 74 per cent larger than the current First Class Suites, and boasting a separate bed and armchair in a unique single aisle concept – the first time this has been achieved on a widebody commercial jet; and Business Studios in Business Class, offering more luxury, technology and 20 per cent more personal space.

The upper deck cabin entrance has transformed the boarding experience into one akin to stepping into a boutique hotel. Cabin lighting has been influenced by the geometric patterns in traditional architecture and also the modern design marvels such as the mosaic-style ceiling of the Louvre Museum in Abu Dhabi. Specially placed gobo lighting subtly refracts the airline’s ‘Facets of Abu Dhabi’ design onto cabin walls and floors.

The new cabins offer an unprecedented level of luxury, space and privacy in the most highly customised commercial cabin interior ever.

Under the Parra Sun with

Under The Parra Sun, is a month long festival taking place at the Emporium Parramatta. I was delighted to attend an exclusive preview with…