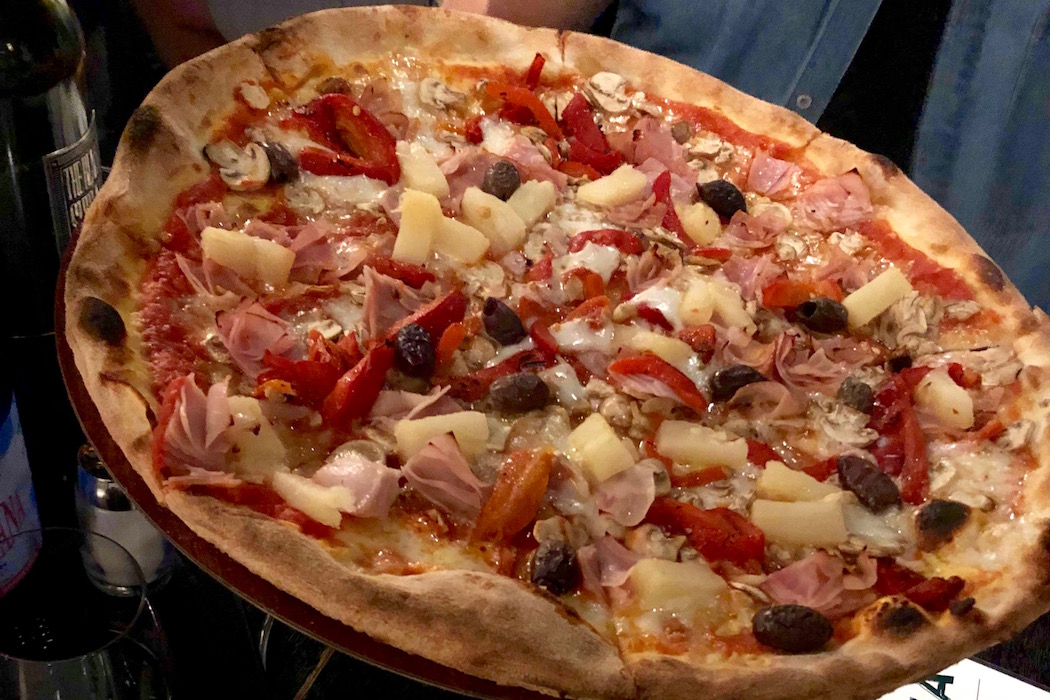 The emigration of the 1940s and 50s saw an influx of Italians making their way to Australia in hopes of a better future, my grandfather included. Although they came with few belongings, they did however bring along a wealth of knowledge of food and this played a huge part in shaping the Aussie food scene indefinitely.

Fast forward 70 years and Sydney plays home to hundreds of Italian restaurants across the city. Growing up and living in the Inner West, I’m pretty sure it’s council law that each suburb have at least three Italian restaurants, all vying for our bottoms on their seats. And with pasta being one of my favourite things to eat- being half Italian, I’m pretty sure my DNA is made up by linguine and penne- I’m never too far away from a plate of it.

For weeks when mindlessly scrolling through Facebook, I kept seeing the name and interesting logo of ‘Donny’s Pizza’ over and over again and thought it looked like a cool place to check out.

Having tried visiting the venue on a Saturday night a few weeks ago, the 30 minute wait was overpowered by my grumbling stomach which saw me continue my search elsewhere. Unfortunately they don’t take bookings so I recommend heading for an early or late bite, or be prepared to wait.

Disappointed on this occasion, I decided to try a weeknight in hopes of being able to get in and even for a Thursday they were still pumping but we managed to get a table. Located in the sleepy suburb of Abbotsford, the restaurant was brimming with dinners young and old and the venue has definitely has brought a spotlight to the suburb.

The restaurant opened back in November 2018 by brothers Daniel and Alex Carnevale and their friend and Head Chef Matthew Serci. I think we need to take a moment to point out all three guys are under 30 and should be incredibly proud of what they’ve achieved in such a short time.

The menu is a lot more extensive than I was expecting and had a variety of options across each course. Each time a dish was walked past us to be placed on a neighbours table, the infusion of garlic and fresh herbs lingered and my mouth watered a little more each time. On this occasion I was accompanied by my fiance, Florian and my good friend and dining buddy, Raf. One thing we all had in common on this occasion was we were starving and ready for a good meal.

I’ve always been a sucker for fried prawns and when I saw the Fritto Misto on the menu, there was no chance I was passing this one up. I’m also half Spanish and the croquettes stewed up a curiosity into how Head Chef, Matthew had brought an Italian spin to a Spanish cult dish.

When the Fritto Misto was placed on the table, my first thought was, ‘oh, no aioli?’ However, after my first taste of the crispy shelled prawn I understood why this condiment was left out. I think I’ve become so accustomed to drenching good food in sauces, I’ve actually been masking the natural flavour of the dish. A good squeeze of lemon over the top is all this dish needs to be enjoyed.

Upon biting into the croquette my taste buds were shocked to discover cheese sauce instead of potato paired with a smoky aftertaste. Cooked to absolute perfection, the outer skin was crunchy and a fluffy gooey inside was a welcomed contrast of textures, that again, was flavoursome enough to eat without any sides.

If the above hasn’t sold how good our entrees were, when they hit the table, I completely forgot to take a photo and jumped straight in.

For main we opted for two Italian staples, pizza and pasta and ordered the Don Supreme and Linguine Vongole.

Dinners rejoice for I think I’ve found Sydney’s best pizza! This may result in a bit of backlash but I’ve eaten a lot of pizza and I think the sign of a good slice is comprised of three elements: the base, the toppings and the crust. Often I’m left with delicious toppings on a soggy base or the crust is burnt and flaky but Donny’s Pizza ticked all three boxes.

The ingredients were super fresh and each bite had a depth of flavour from the smokey ham to the sweet pineapple and roasted capsicum. Usually I leave my crusts as I’d rather eat more topping than filling up on dough but with this pizza, I enjoyed the whole thing. I don’t know what ingredients they’ve used in this base and I can’t quite describe it but it was just such a flavoursome end to each slice. This is the mark of freshly made ingredients and homemade dough.

I think the measure of a good chef is their ability to make the most simple dishes a stand out, and this was a contributing factor of me choosing the Linguine Vongole. A flat skinny pasta paired with cherry tomato, vongole and prawns, the dish absolutely blew my mind. Each mouthful was a contradiction of flavour as it was creamy in texture and taste but wasn’t a cream sauce but rather oil. The cherry tomatoes were soft pillows bursting with sweetness and the linguine was cooked to the exact right moment. For such a straightforward dish, the richness of ingredients made the dish an absolute stand out of the night.

We were lucky enough to steal the attention of Head Chef Matthew for a moment as he joined us for a quick chat. When I asked what inspired the dishes on the menu, he revealed a foodie tour of Europe back in 2016 with Daniel, undoubtedly shaped the way he looked at food and cooking forever. From street food in Napoli to training under a 3-star chef in Florence, he used these learnings to recreate the dishes Italian kids ate growing up. He shared the secret to his delicious pizza actually took months of trial and error, from finding the right flour to the exact technique of cheese to dough ratio to get it just right. Just for the record Matt, I’m always available to road test a new dish if you need!

The only thing I was a little disheartened by was the small dessert options available. I always love to try a restaurant’s take on the sweeter side of things and the only dish available was a nutella pizza. I absolutely love nutella pizza don’t get me wrong, but we were pretty full and the thought of another pizza was little too much. At the exact moment we decided to skip the dessert idea all together, we were treated to mini pizza bites with nutella and strawberries compliments of the restaurant. My only piece of advice would be to add this to the menu permanently as it allows you to still indulge in a sweet treat, but on a smaller scale.

The service was diligent yet not overbearing, the food came perfectly spaced out between courses and the R&B classic playing throughout the restaurant made it hard to remember you were tucked into a small restaurant on Great North Road.

Donny’s Pizza is an overdue edition to the Inner West dining scene and I can say I have definitely found my new local dining venue. Be sure to let them know you read my article on T&L when you arrive!

Dominique is a Sydney girl through and through. She's a blogger, shoe hoarder, passport stamp collector and wannabe wine connoisseur. She'll always be the one shouting "hip-hip" at birthday parties and will never say no to adding pineapple to pizza.

You had me at Pizza, The Garden West launch

It may have been the morning after the Sydney Gay and Lesbian Mardi Gras, but that didn’t stop me from heading out west. It…