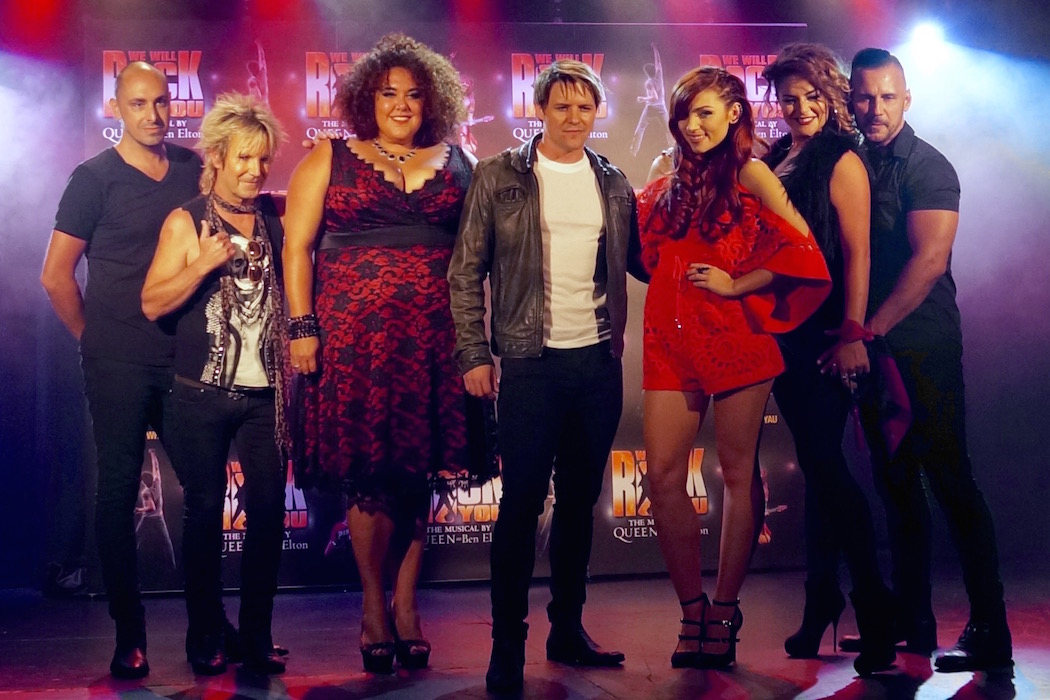 So after a year building up my profile within the musical performance sector – whether be musicals, plays or performing arts/dance. Today I was left with no words (otherwise known as, I “choked” haha)

Sometimes we would be given the opportunity (insider secret) of whom will be in the cast before the “meet the cast” launch. I usually try to prepare myself with personalise questions for the actor/singer – so that I am not “another person” asking the same boring old question. Other times, I would have known a little of their work and have been to some of their shows previously and made some sort of connection.

Though, for some reason I got “stage fright”. I attended an exclusive cast announcement of WE WILL ROCK YOU. Another musical smash hit, by the talented and great person to know, Mr John Frost, from Queen Theatrical Productions, and Phil McIntyre,  from Entertainment and Tribeca Theatrical Productions.

It was a great sunny afternoon here in Sydney and I headed to the Oxford Art Factory to take a sneak peak on the performance and meet the cast. Gareth Keegan, Erin Claire, Brain Mannix, Casey Donovan, Thern Reynolds, Jaz Flowers and Simon Russell.

Gareth Keegan – yep from Jersey Boys plays the central role of Galileo, a Bohemian dreamer who hears strange song lyrics in his head and is ultimately the reincarnation of Freddie Mercury. Erin Clare from The Phantom of the Opera will be Scaramouche, a sarcastic, cynical Bohemian misfit with sharp wit who wins Galileo’s heart and is the reincarnation of Brian May, only this time “he’s a babe”.

Brian Mannix, who could not forget his 1980s band Uncanny X-Men, plays Buddy, an old hippy librarian/philosopher and an expert on the lost sacred musical texts. Killer Queen, a ruthless and power-crazy businesswoman who rules the world through Globalsoft, the worldwide corporation responsible for the suppression of all live music and all original thought, will be played by the extraordinary Casey Donovan from The Sapphires.

Director Ben Elton claims he has assembled a powerhouse cast of Australian talent. “Australian musical theatre is famous world-wide for the excellence of the artists it produces,” he said. “WE WILL ROCK YOU has featured Australians in productions as far apart as Toronto, London and Berlin. Check a musical cast list on Broadway or in the West End and the chances are you’ll spot an Aussie. Brian, Roger and I know that the new all-Australian cast is second to none.”

The Australian tour of WE WILL ROCK YOU begins at Sydney’s Lyric Theatre on 28 April 2016, then travels to the Lyric Theatre, QPAC, Brisbane from 10 July; then on to Melbourne’s Regent Theatre from 30 August. Perth’s Crown Theatre follows from November, then the Festival Theatre, Adelaide from January, 2017.

With more than 24 of Queen’s biggest hit songs including We Are The Champions, Radio Ga Ga, I Want To Break Free, Somebody To Love, Killer Queen, Don’t Stop Me Now, Under Pressure, Bohemian Rhapsody, Another One Bites The Dust and of course, We Will Rock You.

Here’s hoping I get to meet the cast again and capture a quick video interview with three questions you want to hear.

The Australian cast tour will kick off in Sydney at the Lyric Theatre on April 28 before making its way around the nations capital.

We Will Rock You
www.wewillrockyou.com.au

Paris on the way

Contrary to some other travellers, when I am alone, I do like going on guided tours that have some real substance in the program…