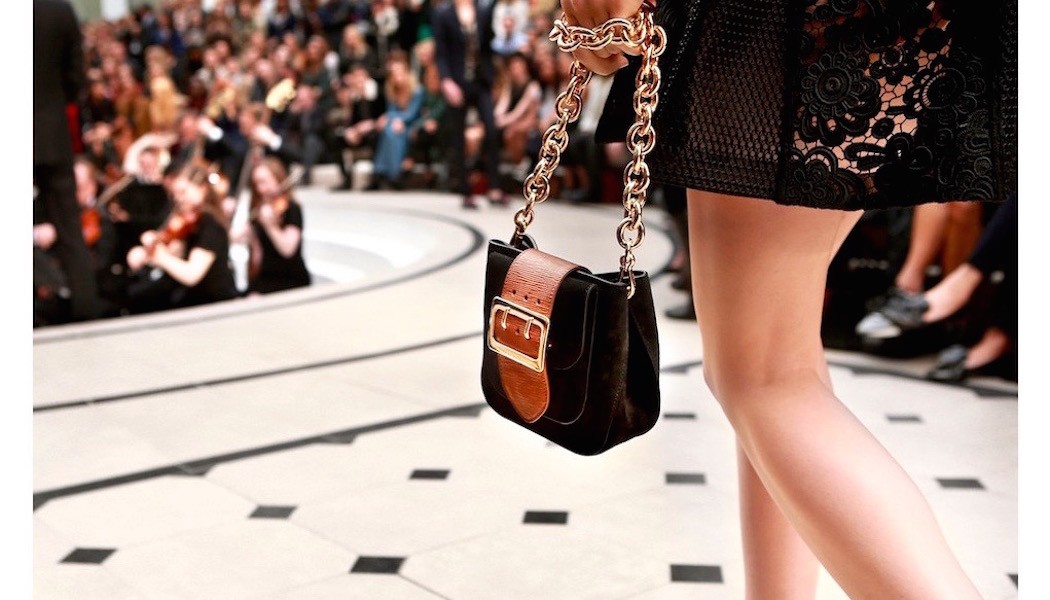 Burberry’s Womenswear Spring/Summer 2016 show took place in a custom-built show venue in London’s Kensington Gardens, revealing the collection which was premiered through the first ever Snapchat Show. The show was accompanied by a live performance by British singer Alison Moyet.

The Functionregalia collection
Classic coats and functional pieces were mixed with elements of regalia including metallic cording, crested buttons and hand-embroidered military motifs. English lace and floor length satin dresses were paired with leather biker jackets, and regimental tailoring with tie-dye tulle. The latest collection introduced the Burberry Rucksack in gabardine-constructed nylon and the Belt Bag in black English suede.

Premiere of the collection through the first Snapchat Show

In the latest chapter of the brand’s digital innovation story, Burberry followers were able to see a preview of the collection through the first ever Snapchat Show – looks from the collection were shared live as finishing touches were being made in Burberry’s headquarters in London – an industry, platform and brand first. Burberry’s show coverage on Snapchat also included a never-seen-before glimpse into the brand’s design studios, and featured a special appearance by Anna Wintour, receiving her invitation to the show, as well as live reactions on the red carpet from guests as they arrived.

The 24 hours, the “Burberry Live Show” houses a Snapchat-curated montage of crowd-sourced Burberry show related video and imagery, giving an access all areas vantage point into Burberry’s show from the red carpet to backstage and beyond to the platform’s 100 million users.

British singer Alison Moyet performed the live soundtrack to the show, accompanied by a 32-piece orchestra conducted by Joe Duddell from an orchestra pit in the centre of the runway.

The performance was filmed for Burberry’s new, dedicated channel on Apple Music, which launched earlier this week, making Burberry the first global brand to launch a channel on the platform. The full show soundtrack, “Alison Moyet Live for Burberry”, will be available to purchase through the iTunes Store and for streaming through the Burberry Apple Music channel from tomorrow.

Burberry also announced that they will be offering a selection of its make-up collection, through Kakao Giftshop and LINE in Japan, enabling a new way to discover and purchase Burberry Beauty products on the platforms. In another brand first, Burberry Make-up Artistic Consultant Wendy Rowe will hosted a live make-up tutorial and was streamed exclusively on the Sephora YouTube Channel.

What was your favourite look?

*all images courtesy from Burberry

You can Swing a Cat but can you Cold Press?

Have you ever heard of the expression, “not enough room to swing a cat”, well you can put that to rest at this tongue-in-cheek…