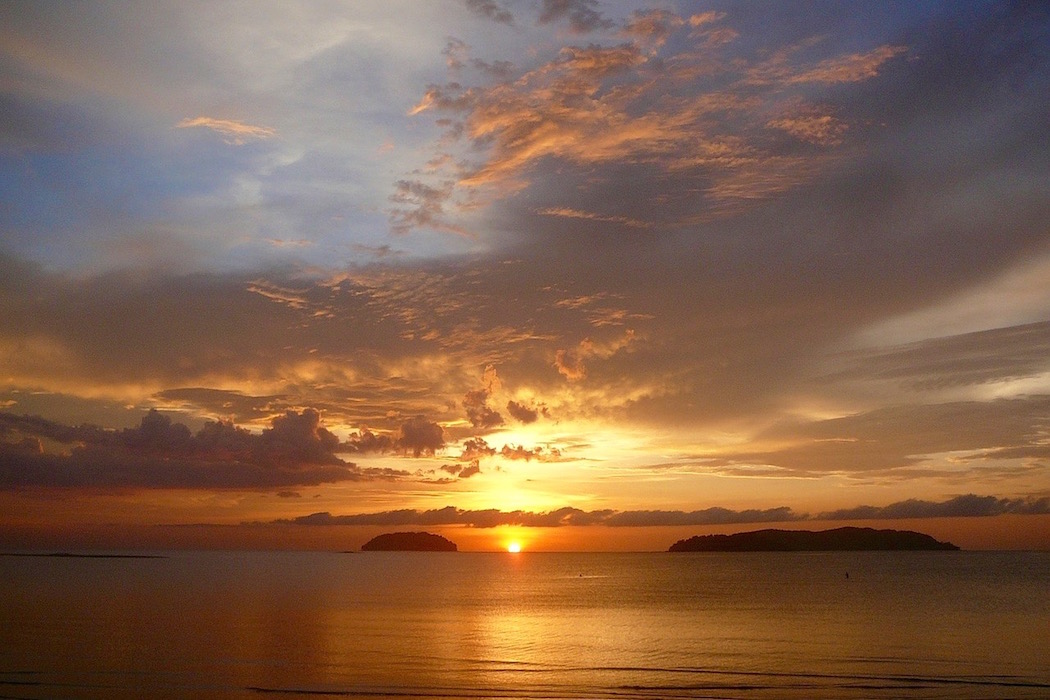 Most people, who think of Borneo, think of lush rain forests and orang-utans. However, I discovered a completely different side of Borneo. I chose to fly out to and stay in Kota Kinabalu. Kota Kinabalu is on the ocean side of the island, so, instead of lush rain forests, Aidan and I had paradise like Islands around us and so, we spend most of our time there in the water.

I am personally not a big fan of booking tours ahead of time, because you always end up paying more. What I like to do, is take the time and have a look around and that is exactly what we did. At first, we came across a travel agent, who showed us all the tours he could book for us, among which were several island-hopping tours. After seeing the options, I decided that a trip to the harbour would be the best, to find out about their offers.

Our two-star hotel was not just clean and very concerned with our well-being, they were also very centrally located and so we only had a 20-minute walk to the harbour. We entered a big hall, were many boat and business owners were vying for the attention of the tourists. We ended up booking an island-hopping tour for in a couple of days, with pick up from the hotel and for Aidan snorkel gear hire (I had my own snorkel gear).

The next day, when we walked around and thought about what else we wanted to do, someone on the streets approached us and offered us a very cheap diving tour. We took his card, but I knew that we would never accept the offer. When it comes to diving, I rather do it with an established and professional business because of the risks involved. We went back to the first travel agent and booked a diving tour with him, which was still incredibly cheap compared to Australian standards.

The island hopping tour the next day started with the boat owner coming up to us and telling us, that he charged the two Chinese girls, we were about to meet, triple the amount of what he charged us and so, that we should lie about what we paid, if they happened to ask. The tour itself was fantastic, spending the whole day on three different islands, constantly snorkelling and seeing the beauty of the underwater life was fantastic.

The only negative point is, that the natives don’t care about the environment and simply leave their garbage everywhere. Which means, that you visit stunning beaches, with white sand and the bluest ocean you can imagine, but then there is garbage everywhere. Another problem is created by many of the Asian tourists, who can’t swim and then trample on all the beautiful corals in the water, destroying them.

A couple of days later, we went on the diving tour. The business owner was an immigrant from Sweden and he had booked a snorkelling group at the same time. Aidan and I were the only divers that day, which was fantastic. It was Aidan’s very first dive, but my second one and this time, I could finally get into the water with a back roll off the boat, like they do it in movies. At first, we swam closer to the shore, to get a feeling for the diving equipment. During that, they found out, that I float and had a hard time getting underwater and so they had to put extra weights (seven kilograms) on my belt for me to stay down.

After that, we went for a half an hour dive before getting back on the boat and collecting the snorkelers. We had lunch on one of the islands and after a short break, we had our second dive that day. I must say, that the dives were beautiful, I would even say that I would rather dive in Borneo than in the Great Barrier Reef. On a funny note, even with the extra seven kilograms on me, as the air tanks emptied, I started floating to the surface involuntarily.

Everybody, who loves diving and snorkelling will have a great time in Kota Kinabalu. It is always hot and at least for now, the underwater life there is amazing. I hope, that maybe one day, I will return.

Contributor: Monique Pitzer, born and raised in Germany and came to Australia for the first time in 2008. I have worked as a freelance Journalist and Writer in Germany for about 8 years. I have a Bachelor of Arts degree in English and specialized in literature. In 2015 I have started my own business here in Australia and work as a writer, tutor, story editor and translator. I am also an author and self-published my first book in 2016.

Evening with our Designers 2015

To mark the launch of the Spring/Summer season and 1891 Volume 05, the Strand Arcade hosted the 15th Anniversary of the Evening With Our…