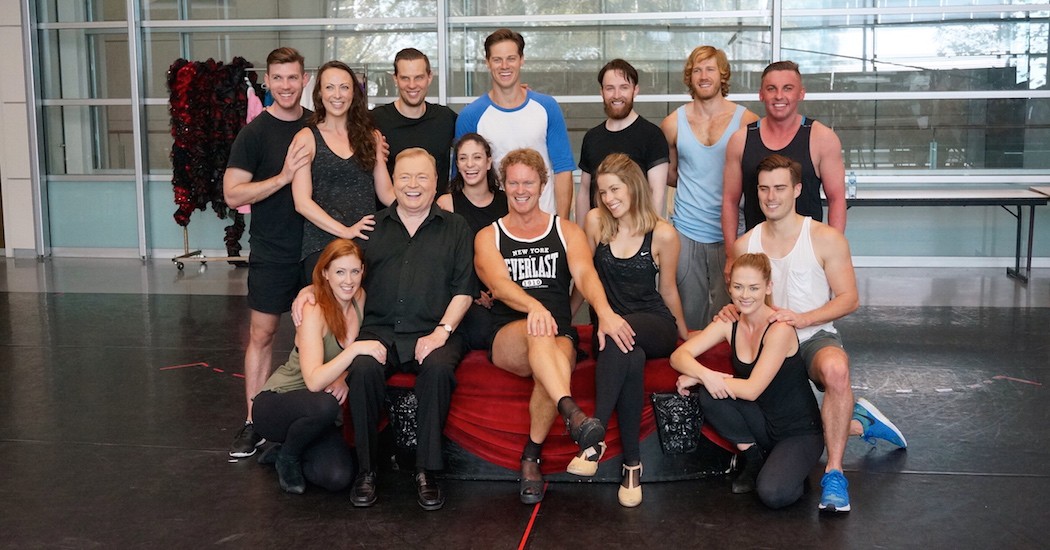 Let’s do the time warp again!

I was lucky enough to catch up with the cast for a behind-the-scenes rehearsal look for the musical before they take to stage at the Sydney Lyric on April 11.

At ABC studios, the cast started with some vocal exercise as they limbered up for the cult classic show signature tunes, “Time Warp” and “Sweet Transvestite”. The narrator played by TV veteran Bert Newton explains that Brad and Janet are feeling “apprehensive and uneasy”, but must accept any help offered. Before they can leave, Frank N Furter the cross-dressing mad scientist lures them up to his lab.

As I watched the routine unfold before my eyes, I was taking it all in and felt like I was just at the theatre. Albeit everyone was in the gym gear and as I turn to my left I saw the director, Christopher Luscombe keeping a close eye on the choreography and ear to the singing. I almost felt I was interrupting as I was clicking away with my camera – but mind you, there were other people there doing the same thing.

In the original cult classic, we saw Brad Majors played by Barry Bostwick and Janet Weiss played by Susan Sarandon. This year we welcome Stephen and Amy to the stage.

You will remember Amy Lehpamer as Reza from ‘Once the Musical’ and as Christine Colgate from ‘Dirty Rotten Scoundrels’. This rising musical theatre star is a fresh-look to Rocky Horror and she finds the role fun and challenging at the same time, a great test of diversity as a performer.

Her on-stage fiancée Brad, played by Stephen Mahy is a great down-to-earth person. Just finished his Australia tour as Kenickie in ‘Grease’ and has previously performed as Bob Gaudio in 2009-2011 in the musical ‘Jersey Boys’. Stephen who grew up in Sydney’s Northern Beaches, talks about the enthusiasm of loyal fans and how the musical primarily centers around open-mindness and not to judge people just because they are different.

Craig McLachlan was awarded Best Male Actor in a musical at the 2014 Helpmann Award. With his non-stop comedy during rehearsals he brings the cast together. “Certainly the most fun you can have on stage without getting publicly arrested”, he quotes. The audience is such a big part of the show and it’s amazing to see such participation.

The 40th Anniversary is a must see show of 2015, a timeless production that is charismatic as Craig McLachlan performs a delicious and flamboyantly camp persona.

*An additional transaction fee and/or a credit/debit payment processing fee may apply.

International food and wine festival Sabor a Cabo (Flavours of Cabo) returns for its tenth year, taking place from 2 – 5 December at…