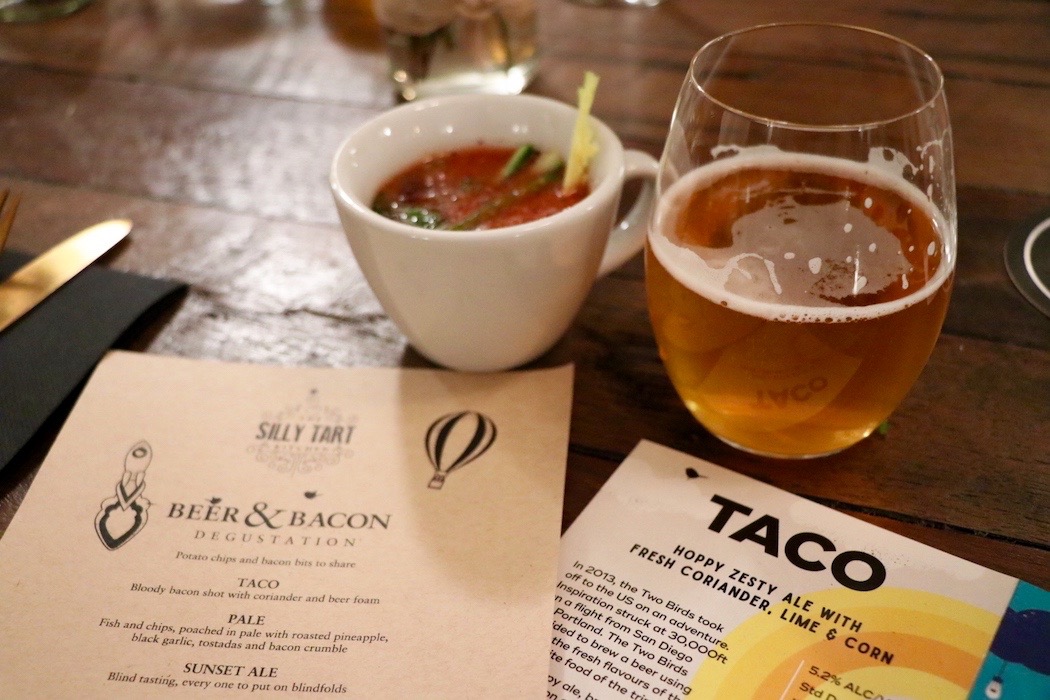 Situated within the heart of Kings Cross is The Silly Tart Kitchen, a new café-style restaurant putting a spin on country kitsch and comfort food.

Raf and I were invited by owners Nina Purton and Chef Josh Cook to attend a special 5 course Beer and Bacon Degustation on Wednesday night. Whilst the normal menu is currently only breakfast and lunch, this was a good chance to see just what The Silly Tart Kitchen is all about.

Bringing the beer to the bacon was Two Birds Brewing, the sole licensed brewer for the restaurant. Each dish was not only paired with a Two Birds beer but also incorporated the beer itself.

To ease us into the night we were served the Taco. I’m not an avid beer drinker but this was light, zesty and quickly became my favourite drink.

Across the night, our taste buds were occupied by a bloody bacon shot, a salty but distinctive spin on fish and chips (Pale), carpet bag steak and confit sirloin (Winter Stout).

Along with the quality banter from the Two Birds team and a blind tasting of macaroni and cheese with a bacon twist (Sunset Ale), the highlight of the night was undoubtedly the bacon jam. I was originally perplexed by the concept but somehow it worked so well that Raf and I were asking about jars of it by the end of the night.

Explaining why they paired beer and bacon, owner Nina said that the typical wine and cheese pairing was overdone. They wanted to see something more unfamiliar and to do this, even went as far as curing their own bacon.

A few more courses and the night finished with a slither of chocky cake and candied bacon (IPA). Raf and I had the chance to have a chat to Chef as he was plating up. He explained that the dishes on their regular menu are familiar to everybody but have been reconstructed to fit a ‘twisted country’ theme.

And his favourite dish? The pikelets.

“They are about an inch and a half thick…and they are more like soufflés. So, I make my own Turkish Delight and I serve it with that. Candied ginger, rose petals, a pistachio crumb and spiced orange syrup.”

After meeting Josh and Nina, it was easy to see that their charisma has fashioned their food and restaurant.

Whilst Wednesday night was a unique dinner style event, The Silly Tart Kitchen will no doubt be a new stamping ground for brunch lovers.

Open for breakfast and lunch everyday Tuesday to Friday 7am – 4pm and on weekends 8am – 6pm.

Go Local with Sheraton on the Park

Calling committed foodies, seafood lovers and gin connoisseurs alike. If wining and grazing on lavish delights enthrals your tastebuds, then brace yourself for foodie…