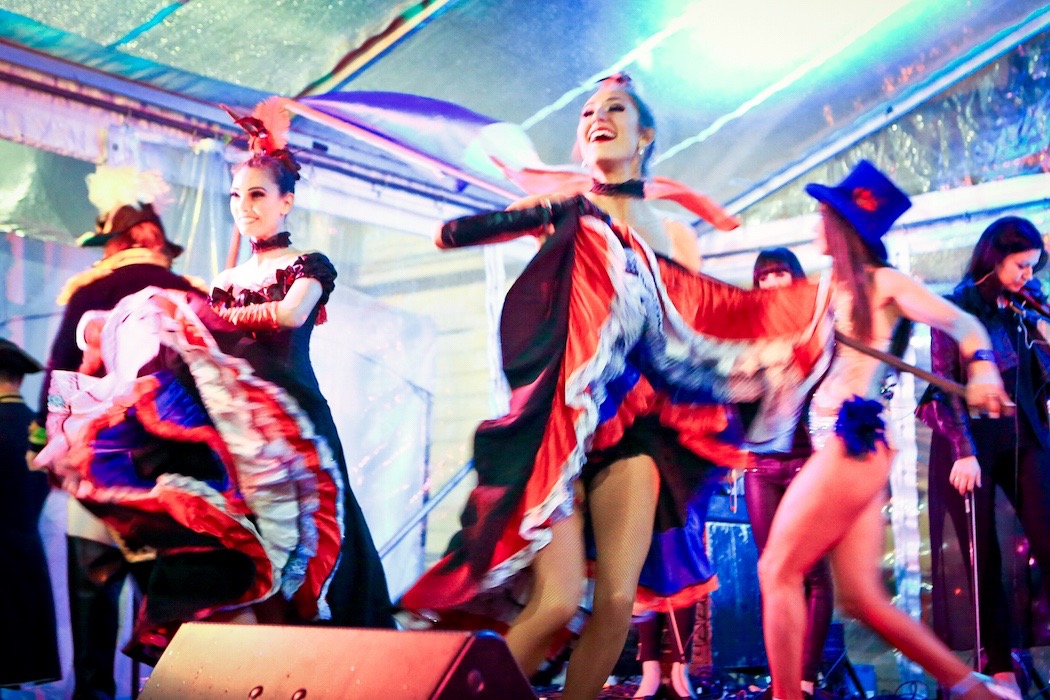 The French immersion begins Thursdays 14 July at 7am with a French croissant and a “Cafe crème” on actual Bastille Day. Live concerts will start at 11am, followed by the official Bastille day party from 6pm with French music and cabaret girls ringing in Bastille Day in style. Firemen officers will also be around to celebrate Bastille Day like the French do !! Celebrations are set to be so French, you’ll be transported from Circular Quay to the Moulin Rouge with tunes, dancing, eating and drinking.  The party will be followed by the first of many films screened over the festival, the greatest cult French film “Les Bronzés font du ski” at the Open Air Cinema. (Free events)

Friday 15 July at 7pm, the Festival Village will host a 20 minutes authentic French Cabaret Show. Voted best three things to see in Sydney, The Magicians Cabaret will deliver an enchanting body of work at 2016 BBR Festival. When the curtain will rise, your will step back to Paris in the 18th century, the birthplace of cabaret. Experience its story telling, its song, its dance, its magic. (Free event)

For food lovers, one of the highlights of this year’s festival are the “Tour de France” cooking masterclasses held daily by French Chefs to learn how to cook traditional dishes from the regions visited by Le Tour de France 2016. From Mont St Michel to Mont Blanc, explore the culinary specialities of these summits crossed by Le Tour in 2016. The Masterclasses are the only ticketed events at this year’s festival. For your special Travel & Lifestyle discount – visit here for more info.

The French Village Market features everything you need for a French experience in our backyards. Glorious French food with Stalls offering the best of the best from French eats. Bite into the best baguettes, smell stinky cheese and try traditional French cakes and treats.

The food centric market would not be complete without a feature of the best wines from the most reputable regions. Drink your way from Bordeaux to Beaujolais, Loire valley to of the nation’s luxury, Champagne.

This year, the BBR Festival also brings the best of European and French-speaking cultures home without the jet lag. Fest through the European village market with stalls across Greece, Italy, Spain, Belgium, Germany, Portugal and Switzerland. In total, the festival boasts 60 food vendors from 9 countries over 3 villages.

The market place will also feature authentic European style Artisan and Flea Antique Markets, showcasing the best of Parisian lifestyle design so you, your home and your fridge are so “Oh la la!”

Daily entertainment will be provided by a range of Street Artists, performing each afternoon, ranging from fire twirlers, circus revellers, flamenco and salsa dancers, German, Italian and Grec Folklore, and tantalising acrobats daily at Gateway Plaza.

We will also enjoy 14 free live concerts by French and international artists and bands and  funky free dance parties in the Festival village.

This year,watch your favourite French movie in a bed !  The Open Air Cinema will run nightly, featuring cult French movies with English subtitles, a selection from the funniest to the most popular family friendly films.

One of the biggest highlights of the BBR Festival 2016 is the Canadian Snow Island which will cover AMP Square/ Scout Place with 3 tons of real snow throughout the weekend for a total winter experience. The winter island welcomes a hockey field where the Sydney Bears players are set to host a street hockey game. There will be also a Maple Candy on ice station to create your own lolly with Maple syrup, a Maple products shopping area and of course the traditional Canadian “poutine”

The festivities end on Sunday 17 July with bang as a parade featuring all the performers takes place throughout the festival locations.

The BBR Festival is a not-to-be-missed celebration of the French “art de vivre”. 3 villages will transport you to the streets of Montmartre on a sensory exploration of Europe and snowy French Canada through wild entertainment and delicious delicacies across four days in Sydney’s Circular Quay foreshore.

Sky Terrace Rooftop Bar at The Star is back for summer, kicking off this long weekend on Thursday 1st October, delivering 4 nights jam-packed…