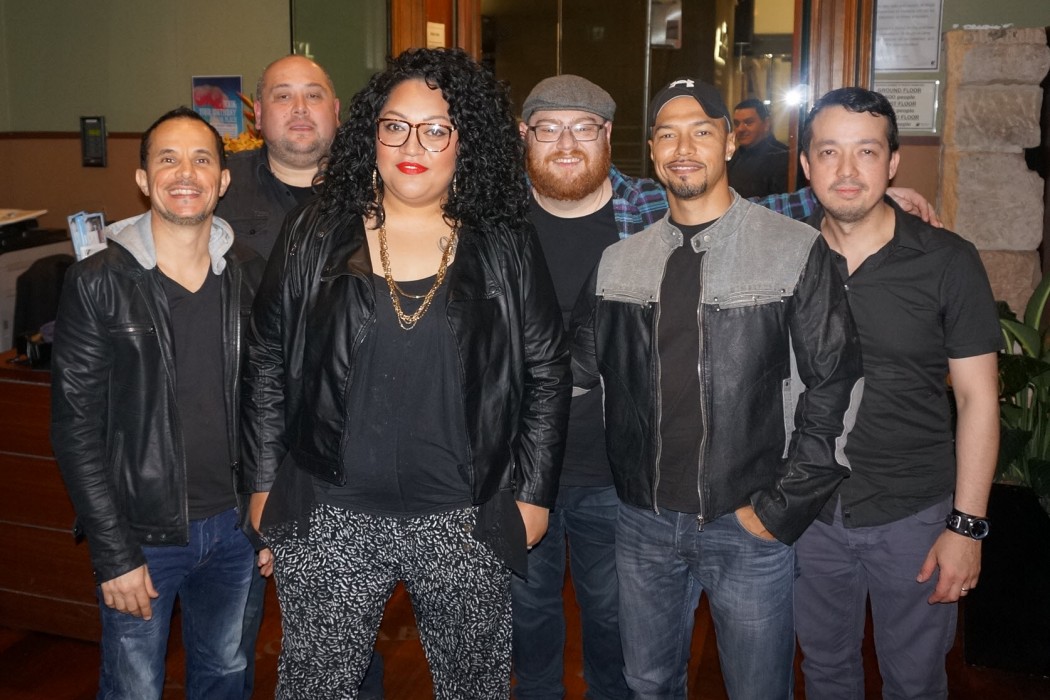 It is astounding that music not only survived the chaotic trends from the naughty’s to now, but the distinctive vocal style of Lady Lyric and Miguel George have become a major influence in this fantastic band Deni Di Filippo created – BROWN SUGAR.

With a scope that includes up-to-date R&B, classic soul and rhythm, old skool music is re-imagined with a band that takes the beat.  Brown Sugar is predominantly an R&B/Soul band, and available for all kinds of gigs, including weddings, corporate functions, social events, including premier venues around Australia and abroad.

Brown Sugar currently has a weekly Friday residency at The ArtHouse Hotel in Sydney’s Pitt St.  One of Sydney’s popular watering holes also doubles as an art gallery.

Like my mates and I, we are crazy about live music. We love to see REAL artists on stage hitting those notes and a strong band to key in. When I saw Brown Sugar, live for the first time, they commanded the stage and captured the audience. The die-hard fans can see that these guys have real international talent with star charismatic charm to match.

Not to forget the pre and post music styling of DJ TREY. DJ TREY brought depth to the performance with his clever mixing and soulful blends. He is very much responsible for hyping up the crowd and delivering a performance in his own right.

Brown Sugar consists of six members which includes Lady Lyric & Miguel George on vocals, Michael Dolce on Guitar, Johnny Grguric on Bass, Deni Di Filippo on Drums and Jonathan ‘JC’ Corea on keys and saxophone. With a band that was nominated for an Urban Music Award, they have played countless Basement tribute shows, and have featured on the Four Weddings TV show, NITV, Hip Hop TV and several big events like. Without name dropping, members from Brown Sugar are currently working or have previously worked alongside artists including John Butler Trio, Delta Goodrem, Jessica Mauboy, Deni Hines, Guy Sebastian, Ricki Lee and more. Members from Brown Sugar are consistently working on TC shows such as The Voice, and have featured with several international and national artists at events such as The Arias, The Teen Choice Awards and the Nickelodeon’s Awards.

The group’s success aligns with the current resurgence of positive and uplifting messages and genres within the music scene, which Brown Sugar believe is because, “Everyone likes to groove to the music. And a lot of music in the last decade has been sort of melancholy, and it’s all got its place, but this band brings back old skool and the classic beats, which everyone enjoys, and I’m sure other people do too” they laugh.

I asked how tough is it to break into the Australian music scene?

“It’s really tough, but that shouldn’t be a deterrent” relays JC.  “We all came from music backgrounds growing up, Lady Lyric lead in a high school musical and then was a club MC for years, Miguel started in a dancing boy group,  Johnny grew g up in a Tongan family filled with music around the house, likewise JC and Deni were always surrounded by music from family & friends. jamming with mates” they all individually replied.

Looking forward, the group is set to keep its momentum going. They are all currently writing and producing songs to hit the high note in releasing a debut album one day.  It’s going to be interesting to see the contrast, and to see if people can tell the difference between the classic, and the ones they wrote. I’m really keen to hear what their fan’s think.

Enter the ‘fan’ who interrupted the interview to say hi and request some Outkast, “on cue” Deni laughs.

What has life been like for BrownSugar since the success of the band growing?

Life has been very busy. The success took us from 2nd gear to 5th gear, so to speak. We have seen our fan base growing and we needed to expand our venue to cater for the crowd.

How long had the band been working together?

11 years. It was more of a hobby at that point – something we did for fun, with no real prospect of turning it into a full time career. It wasn’t until we all started seeing the potential in our music, at which point we decided to bring on Miguel to bring in the ladies.  *everyone laughs*

What advice can you provide to other young bands trying to make an impact?

I know it sounds cliché, but just write, practice, attend as many gigs around town as possible and to go to your favourite artist music clinics and take every gig that comes your way. You can be the greatest musician in Australia, but if you can’t write a good song or play with other people and gain experience, then you won’t get anywhere. The first few gigs you perform can be a terrible experience or just the crowd may not-be feeling you,  but that’s OK! Don’t be discouraged!

Make sure you stay true to your creative self and don’t aim to be like others; those people are already out there doing what they do, and you want to be something new, exciting and individual.

Don’t give up! Newbie bands out there, establishing a band is HARD. The first few years are going to be full of setbacks, heartbreaks and discouragement. You need to fight through these early days with a determination that burns like the fire but once you can break through this barrier, the rewards are phenomenal.

Brown Sugar are available for hire for your next private, corporate or social events.
You won’t be disappointed, professional music management will set you above the rest.